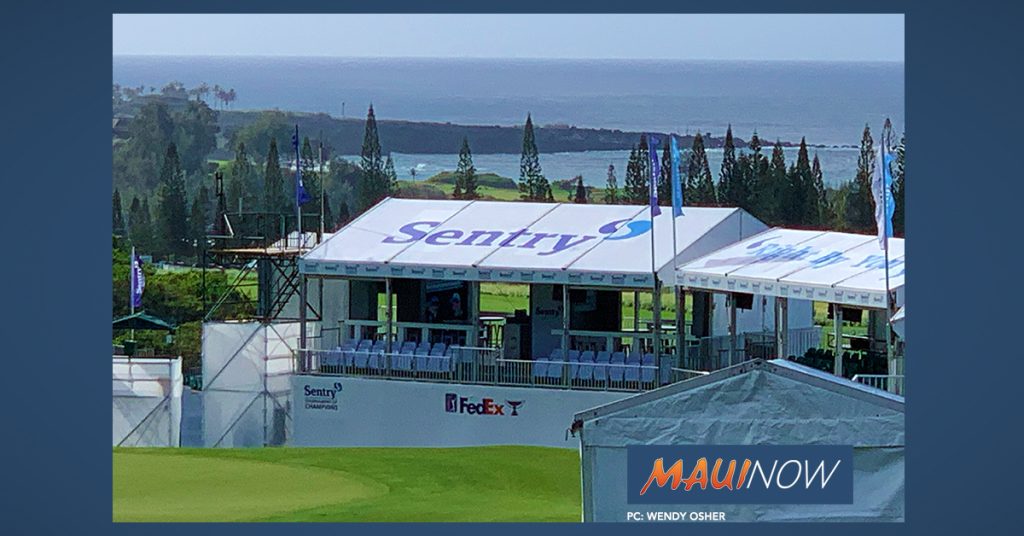 The Competition potion of the 2020 Sentry Tournament of Champions tees off today at The Plantation Course in Kapalua.

The winners-only event features 34 professional golfers who earned entry by winning a PGA Tour event in 2019.

Title sponsor, Sentry, just announced the extension of its role as title sponsor of the event for another 10 years through 2030. The new 10-year deal replaces the original five-year agreement announced in 2017.

Since its move to Maui in 1999, the tournament’s hosts have donated more than $6.6 million to community charities, with more than $345,000 going to more than a dozen Maui nonprofits in 2019.

This year’s tournament runs from Jan. 1 to 5, 2020, with competition play set to start today, and the winner to be crowned on the 18th green on Sunday.

Xander Schauffele will be defending his title. Golfers tee off at 10 a.m., with competition to be covered on the Golf Channel from 1 to 5 p.m. Hawaiʻi Time today.

“On behalf of the PGA TOUR, thank you to Sentry Insurance for its long-term commitment to the Sentry Tournament of Champions and the betterment of the Maui community,” said Andy Pazder, PGA TOUR Chief Tournaments and Competitions Officer. “Sentry’s partnership has been integral in the tournament’s success in the last three years and we’re thrilled at today’s announcement that secures the PGA TOUR’s winners-only event for years to come.”

For Sentry, one of the largest business-focused mutual insurance companies in the United States, this represented its first major sports sponsorship. However, the company has been involved with golf since 1982 when it built SentryWorld, Wisconsin’s first destination golf facility located at its headquarters in Stevens Point, which most recently played host to the 71st US Girls’ Junior.

“Extending our partnership with the PGA TOUR was an easy decision,” said Pete McPartland, Sentry’s chairman, president and CEO.

“It has been an outstanding experience, helping us build our brand and affording us the opportunity to spend quality time with customers and business partners. What we’ve come to appreciate most about being the sponsor of the Sentry Tournament of Champions is the opportunity to fully engage in the Maui community and feel such a part of it ourselves. The many charities the tournament gives to has enabled us to get to know the Maui people and the community’s needs. With Sentry’s commitment to supporting the Tournament of Champions for the next decade, you can be assured that we will continue to work year-round to build community on this beautiful island and grow the charitable giving in ways that are truly impactful,” said McPartland.

Since becoming title sponsor, Sentry has strived to make a direct impact to the local community, including the establishment of the Sentry Scholars Program, which annually awards four scholarships between the University of Hawaiʻi and a University of Hawaiʻi community college to promote the importance of workforce development. In addition, Sentry supports the United Way wherever it does business, and this year will donate $25,000 to the Maui United Way to support education, income sustainability and health, adding to its $25,000 donation to the organization during last year’s tournament.

Aloha Friday will be celebrated at the tournament. To welcome the weekend, fans, volunteers, players and television broadcasters are encouraged to participate in the local tradition by wearing Hawaiian-patterned clothing and, new this year, for every player who takes part, Sentry will donate $1,500 to local charities on that player’s behalf.

The increased community support has certainly been welcomed. “On behalf of the people of Maui County, we’re incredibly excited about this announcement and Sentry’s commitment to our community. We’re looking forward to this continued partnership as this spirit of supporting our community serves as a model for keeping Maui nō ka ʻoi,” said Maui County Mayor Mike Victorino.

But the Sentry connection to the Tournament of Champions isn’t limited to Hawaiʻi. Sentry associates at Stevens Point will be encouraged to wear Aloha Friday attire, while Hawaiian music, golf games and the telecast on Golf Channel will permeate the headquarters, amidst the frigid Wisconsin winter.

The Tournament of Champions dates to 1953, when it was introduced at Las Vegas’ Desert Inn Country Club as an event for winners from the previous season. It remained at Desert Inn CC until 1967, when it moved to Stardust Country Club. The tournament moved from Las Vegas in 1969 to La Costa Country Club in Carlsbad, California, where it remained for 30 years before relocating to its current home at Kapalua Resort on the island of Maui. Troon Golf, which operates Kapalua, recently completed a $15 million renovation on the Plantation Course with original architects Bill Coore and Ben Crenshaw returning it to its roots.

As might be expected with a winners-only format, the Sentry Tournament of Champions has a rich history of champions, from World Golf Hall of Fame members to modern-day stars, as represented by just the past five winners: defending champion Schauffele, two-time champion Dustin Johnson (2018), Justin Thomas (2017), Jordan Spieth (2016) and Patrick Reed (2015).