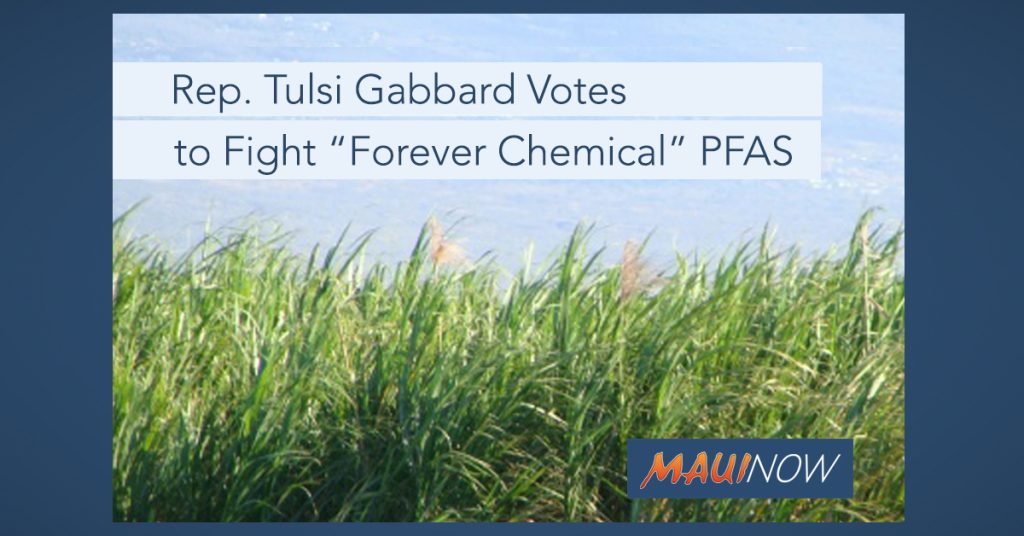 US Representative Tulsi Gabbard of Hawaiʻi voted to pass the PFAS Action Act today, which would bar the manufacturing of new polyfluoroalkyl substances or PFAS, also known as “forever chemicals.” HR535 would also direct the Environmental Protection Agency to establish drinking water standards for them as well as Superfund cleanup designation.

It would also authorize $100 million for this and the next fiscal year for a grant program to support treatment efforts.

“Every American in every community across our country deserves clean water. That is why I voted for and strongly support the passage of the PFAS Action Act today. PFAS contamination sites blanket the map, affecting almost every state and PFAS chemicals have been implicated in cancer and other illnesses. The harmful effects are felt in our veteran and military family community — many of whom were exposed to the chemicals that were used at military installations,” said Rep. Tulsi Gabbard. “Unfortunately, the spread of PFAS contamination is moving faster than the EPA’s efforts to regulate, prevent, detect, and treat contaminated water supplies. Failing to act is a failure to the American people and will only cost us immeasurably more to deal with the environmental and health fallout in the future.”

Congresswoman Gabbard introduced two bills, the Oxybenzone and Octinoxate Impact Study Act of 2019 as well as the Reef Safe Act of 2019, to study and protect public health and our environment, including coral reefs, from potentially harmful chemicals in sunscreen.

She has also joined with 41 of her colleagues to introduce the Ban Toxic Pesticides Act of 2019, which would re-ban the use and stockpile of a toxic pesticide, chlorpyrifos (CPY).