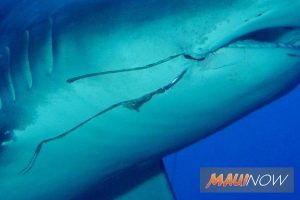 Embedded hooks can restrict eating and may cause internal damage to organs or poisoning, researchers say. Photo courtesy: University of Hawai’i at Mānoa.

Startling data from an eight-year study in French Polynesia shows tiger sharks are facing severe impacts long after they are cut loose from fishing lines.

Researchers say many sharks are left swimming around with stainless steel hooks lodged into their jaws.

“That can have profound consequences for those animals,” University of Hawai’i marine biology professor Carl Meyer said in a press release.

“It can injure or even perhaps kill them because they’re unable to feed properly after these interactions.”

Meyer is a noted shark expert and one of four researchers assigned to the project that launched in 2011.

According to the study, many tiger sharks are accidentally hooked by long line fisheries targeting tuna and swordfish.

Data confirmed fishing boats hook millions of sharks each year, and about one-third bite through the line or are set free with hooks protruding from their jaws.

Some sharks were found with up to seven deeply wedged hooks, researchers say.

Meyer’s four-member team studied 55 tiger sharks just outside Tahiti’s northwest coast–and it was common for sharks to have more than one hook present.

The group published their findings in Fisheries Research and are hopeful the data will lead to a mandatory overhaul of fishing gear.

“If fisheries were to switch from using stainless hooks to carbon steel hooks then the impact on the sharks would be reduced simply because those hooks would fall out much more quickly,” Meyer explained.

Researchers found sharks shed carbon steel, or corrodible hooks, within two-and-a half years. Stainless steel hooks are no longer permitted for use by longline fisheries in Australia and multiple entities in the US.

According to the study, hook retention is a widespread issue that likely affects millions of shark species, including blue sharks, silky sharks, oceanic whitetip sharks, mako sharks and thresher sharks.

Within a few weeks at the end of 2019, Meyer managed to remove four hooks from sharks off Oʻahu.

The study is geared toward advancing insights into shark conservation and management issues.

The World Conservation Union designates tiger sharks as “near threatened” which means they are at risk of becoming endangered.