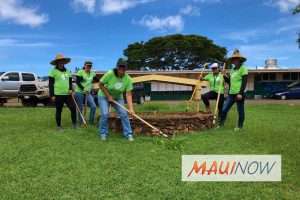 “In 2019, our teammates broke multiple records when it came to giving back – from volunteering more time in our community to donating funds through our annual workplace giving campaign,” ASB president Rich Wacker said in a press release.

Staff members raised more than $170,000 during the companyʻs annual Kahiau Giving Campaign, with a $100,000 match from ASB. In total, $270,633 was donated to Child & Family Service, Kapiʻolani Health Foundation, Kupu, Partners in Development Foundation and United Way.

ASB’s 7th annual Hawaii Curling Club Charity Classic raised more than $100,000 for We Are Oceania, a program of Partners in Development Foundation that advocates for the overall health and wellbeing of the Micronesian community in Hawaiʻi.

The bank continued its tradition of hosting bi-annual cleanups in the neighborhood of its new ASB Campus, which opened in April.

Last May, hundreds of ASB teammates, family, friends and community members helped to rake, pick up litter and paint in Aala Park and surrounding areas. In October, ASB’s Statewide Seeds of Service Day, teammates participated in the bank’s 10th Community Cleanup, in addition to teammates across the state who participated in Habitat for Humanity Builds on Hawaiʻi Island, Kauaʻi, Maui and Oʻahu.

The bi-annual contest, which started in 2015, received more than 300 business plan entries from 33 schools across the state. Students formed teams of two to five to come up with their best ideas for a chance to win cash prizes for their school, ranging from $5,000 to $25,000. Teachers and advisors were provided with a video curriculum, online resources and mentorship via ASB volunteers.