Inouye Recognized as ʻOutstanding Builder of the Yearʻ 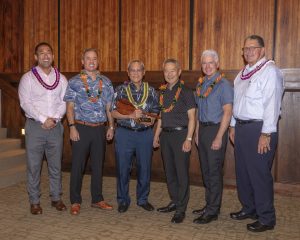 The Hawaiʻi Regional Council of Carpenters has named Lance Inouye its 2020 Outstanding Union Builder of the Year.

Inouye, president and CEO of Ralph S. Inouye Company Limited, Inc., was selected from among 300 signatory contractors of the Hawaiʻi Regional Council of Carpenters for his outstanding contributions to Hawaiʻi’s construction industry and the community, collaborative approach to labor-management relations, and demonstrated strong support for unionized construction.

Inouye’s recognition marks the 16th year of the Outstanding Union Builder of the Year Award. He received the award on Tuesday night at a reception hosted by Pacific Resource Partnership at the Oʻahu Country Club.

Inouye’s father, Ralph S. Inouye, founded the company 58 years ago. Lance joined the family business nearly 40 years ago and took the reins as CEO in 2002.

During his tenure, Inouye took part in the completion of many public and private projects including work at the Daniel K. Inouye International Airport, Shriner’s Hospital for Children, and numerous homeless, low-income and senior housing projects.

Inouye has served on the state Land Use Commission and various union trust funds for both the Hawaiʻi Regional Council of Carpenters and Hawaii Operating Engineers, was president and director of the General Contractors Association of Hawaii, and has supported various organizations including Shriners Hospitals for Children, the Hawaiʻi Community Foundation and Easter Seals Hawaiʻi.