Irish Quintet to Perform at the MACC 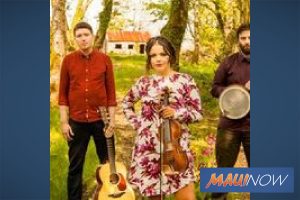 The Maui Arts & Cultural Center presents Goitse (pron go-wit-cha), an award-winning Irish quintet who
will make their Maui debut on Thursday, Feb. 27 at 7:30 p.m. in the Castle Theater. Scheduled just a few weeks prior to St. Patrick’s Day, this concert will offer the Maui audience an opportunity to start celebrating a bit early.

Attendees will have access to a special dance floor area in front of the stage. Goitse is an informal Gaelic Irish greeting meaning ‘come here’. The popular and multi-award-winning quintet Goitse was forged in the creative environment of the Irish World Academy at the University of Limerick. Named Live Ireland’s “Traditional Group of the Year”, Chicago Irish American News’ “Group of the Year”, as well as winning the prestigious Freiburger International Leiter 2016 award in Germany, Goitse have become a leader of the new generation of traditional Irish ensembles.

Goitse has released four critically acclaimed recordings and maintains a year round touring schedule that includes performances throughout Ireland and the UK, Germany, France and the United States. Their distinctive sound lies in the quality of their own compositions interspersed with traditional tunes from the countryside of Ireland and abroad, which make each performance unique. Laying the foundations for the music are World and All-Ireland Bodhrán (the Irish frame drum) champion Colm Phelan,
and Conal O’Kane, who is fast making a name for himself as one of the finest guitarists of his generation.

The gripping rhythm section sets a powerful drive for the music while the sweet, charismatic voice and fiddle playing of Áine McGeeney draws audiences into a song the way few performers can. The group also includes Tadhg Ó Meachair on accordion, and Alan Reid performing multiple stringed instruments including banjo, bouzouki, mandolin, and oud (a pear-shaped lute-like instrument).

Together, the quintet Goitse makes what Irish Music Magazine calls “Music that’s brimming with energy and creative zeal.” And the Chicago Irish American News claimed “This act is now so polished and professional it is no wonder that they are one of the most popular acts on the international festival circuit”