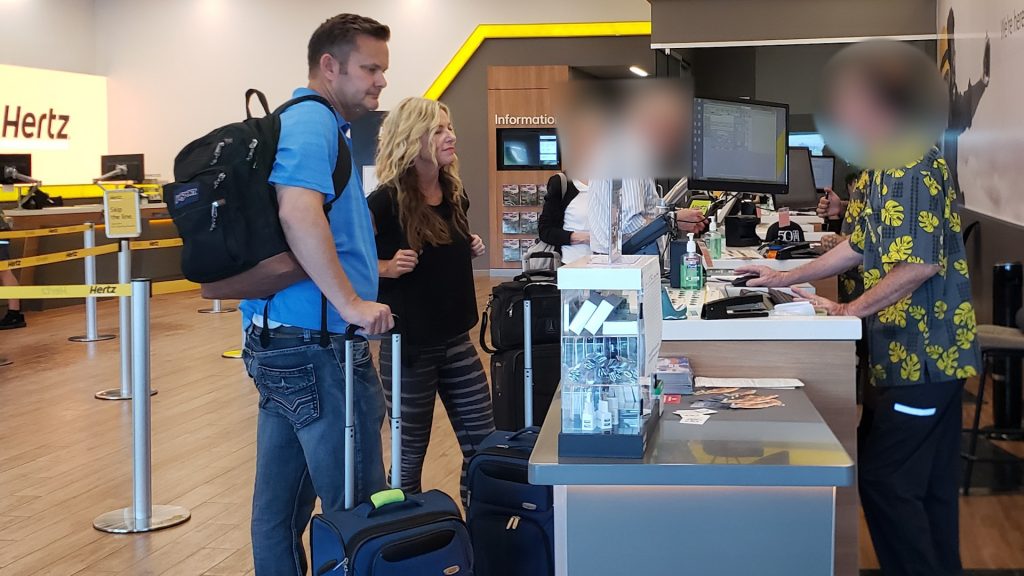 Lori Vallow Daybell, and her husband, Chad Daybell are spotted renting a car at the Kahului Airport on Maui. A woman who emailed EastIdahoNews.com this photo asked to remain anonymous. | Courtesy photo via Nate Eaton with eastidahonews.com

Lori Vallow Daybell, and her new husband, Chad Daybell departed on a flight out of Kahului Airport on Tuesday afternoon, Feb. 18, 2020, two days after they were initially seen on the island.  Sources observed the couple checking in for a departing flight at around 1:30 p.m..  East Idaho News has since reported that the couple is headed back to Kauaʻi where they had been staying for about two months.

Vallow’s children, 17-year-old Tylee Ryan and 7-year-old Joshua Vallow, have been missing since the end of September 2019.

The case has sparked national media coverage amid the disappearance of the two children and the deaths of both individual’s former spouses as well as Vallow’s brother. No charges have been filed to date.  ***See timeline below.

Meantime, Dateline NBC has since made its full episode of “Where are the Children?” available online.

Lori Vallow Daybell, and her new husband, Chad Daybell were reportedly spotted at the rental car facility at Maui’s Kahului Airport on Sunday afternoon, according to Nate Eaton with eastidahonews.com.  Eaton tells Maui Now that the publication obtained the photo above from a source who asked to remain anonymous.

Vallow’s children, 17-year-old Tylee Ryan and 7-year-old Joshua Vallow, have been missing since the end of September 2019.

The woman who snapped the photo took it at around 1:30 p.m. on Sunday, Feb. 16, 2020, and sent a letter to the Idaho publication saying she was on the same shuttle as the couple from the Maui airport to the rental car annex.

The case has sparked national media coverage amid the disappearance of the two children and the deaths of both individual’s former spouses as well as Vallow’s brother. No charges have been filed to date.  Over the weekend, the Idaho Press detailed reasons why the couple have not been arrested, primarily citing lack of evidence.

Maui Now reached out to Maui police for comment, and a spokesperson said the Maui Police Department is not involved in any investigations pertaining to Lori Vallow and Chad Daybell at this time; however MPD was advised that the couple was on Maui.

On Nov. 27, 2019, Rexburg Police executed search warrants at locations associated with Lori Vallow in an attempt to locate Joshua.  “As the search warrants were being executed, investigators determined that Lori Vallow and Chad Daybell had abruptly vacated their residence and left Rexburg,” police said in a press release issued in December.

On Sunday, Feb. 16, 2020, the couple was reportedly spotted at at rental car facility in Kahului, Maui according to Nate Eaton with eastidahonews.com.

In a press release issued in December, Rexburg police said the department in coordination with the FBI and Fremont County Sheriff’s Office are investigating the possible connection between the death of Tammy Daybell, 49, and Vallow’s missing children.

The investigation remains ongoing and is being led by Rexburg police.