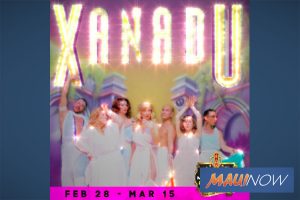 “Xanadu” follows the journey of a magical and beautiful Greek muse, Kira (Lia De Souza), who descends from the heavens of Mount Olympus to Venice Beach, California in 1980 on a quest to inspire a struggling artist, Sonny (Brock Ambrose), to achieve the greatest artistic creation of all time – the first Roller Disco, because hey, it’s 1980! But, when Kira falls into forbidden love with the mortal Sonny, her jealous sisters take advantage of the situation, and chaos abounds.

Based on the Universal Pictures cult classic movie of the same title, which starred Olivia Newton-John and Gene Kelly, “Xanadu” is hilarity on wheels for adults, children and anyone who has ever wanted to feel inspired. Maui OnStage presents “Xanadu” book by Douglas Carter Beane, music and lyrics by Jeff Lynne and John Farrar, based on the Universal Pictures film with a screenplay by Richard Danus and Marc Rubel. Collaboratively directed and choreographed by Kalani Whitford and Camille Romero, under the musical direction of Kirsten Otterson.