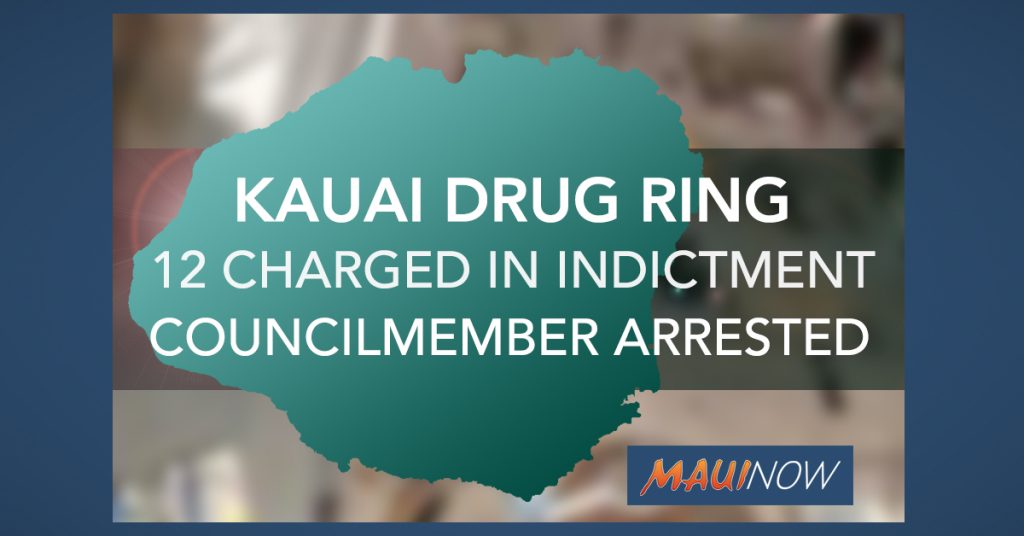 The US Attorney’s office for the District of Hawaiʻi today announced the unsealing of an indictment, charging sitting Kauaʻi County Councilmember Arthur Brun and 11 other defendants with conspiring to distribute methamphetamine.

The Indictment also charges substantive drug trafficking offenses, an assault on a federal law enforcement officer, witness tampering, evidence tampering and firearm offenses. As alleged in the Indictment, Brun participated in these offenses while serving as an elected member of the Kauaʻi County Council.

Eleven of the defendants were arrested yesterday and will be arraigned in federal court later today before the US Magistrate Judge Rom Trader.

The twelfth defendant, Orlando Manguchei, was already in federal custody serving a sentence for violating the terms of supervised release.

As alleged in the Indictment[1]: From at least June 2019, and continuing to in or about January 2020, Arthur Brun (aka “Ata”), Maluelue Umu (aka “Malu”), Kelvin Kauwila Kai (aka “Kauwila”), Steven Keliikuli, Kaniu Huihui, Sheena Millare, Efren Yanos, Kirsten Makanoe Ayau (aka “Makanoe”), Orlando Manuchei (aka “Ole”), Robby Silva, Haidee Sueyasu and Phrystal Bacio, the defendants, and others known and unknown, co-spired to distribute and possess with intent to distribute a mixture and substance containing a detectable amount of methamphetamine.

Authorities say Brun ran this drug trafficking conspiracy while, at the same time, serving as an elected member of the Kauaʻi County Council and the Vice Chair of its Public Safety and Human Services Committee. According to information provided by the US Attorney’s Office, one of Brun’s suppliers of methamphetamine was Umu, who they described as a “shot caller,” or leader, of the United Samoan Organization, a gang that operates both inside and outside of the prison system in the State of Hawaiʻi.

Justice officials say that on or about Oct. 29, 2019, Brun assaulted a state law enforcement officer who was acting in cooperation with and under the control of federal officers. “Brun committed this assault during a traffic stop in an effort to conceal methamphetamine that he had in his possession at the time,” according to a press release issued by the department.  “The officer asked Brun to get out of his car and gave him other instructions. Instead of complying with the officer’s commands, Brun placed the vehicle in drive and sped off, injuring the police officer, who had his hand and shoulder in the car as he tried to remove the keys from the ignition. Brun then led the police on a high speed chase during which he threw a backpack containing approximately one pound of methamphetamine out of the car,” the DOJ release said.

“After the assault,” the department alleges that “Brun made efforts to conceal the methamphetamine to avoid its use in any official proceeding by attempting to corruptly persuade another person to provide false information to the KPD about the ownership of the backpack.”

The department says multiple defendants possessed or conspired to possess firearms or ammunition. According to information provided by the DOJ the following firearms violations allegedly occurred:

Charts containing the name, ages, charges, and maximum penalties for the defendants are set forth below. The maximum potential sentences in this case are prescribed by Congress and are provided for informational purposes only, as any sentencing of the defendants will be determined by the judge.

US Attorney for the District of Hawaiʻi, Kenji M. Price praised what he called “the outstanding investigative work of: the Bureau of Alcohol, Tobacco, Firearms and Explosives; the Kauaʻi Police Department; and Department of Homeland Security, Homeland Security Investigations, Honolulu Office.” He also thanked the United States Marshals Service Fugitive Task Force, the Federal Bureau of Investigations, the United States Postal Inspection Service, and the Coast Guard Investigative Service for their a assistance.

Assistant US Attorneys Sean Van Demark and Micah Smith are handling the prosecution.

The charges contained in the Indictment are merely accusations, and the defendants are presumed innocent unless and until proven guilty.

The information was shared during a joint press conference this morning that included participation from: Kenji M. Price, the United States Attorney for the District of Hawaiʻi; Jonathan E. Blais, Special Agent in Charge of the Seattle Field Division of the Bureau of Alcohol, Tobacco, Firearms and Explosives; Todd Raybuck, Chief of the Kauaʻi Police Department; and Lucia Cabral-Dearmas, Department of Homeland Security, Homeland Security Investigations, Honolulu Office. 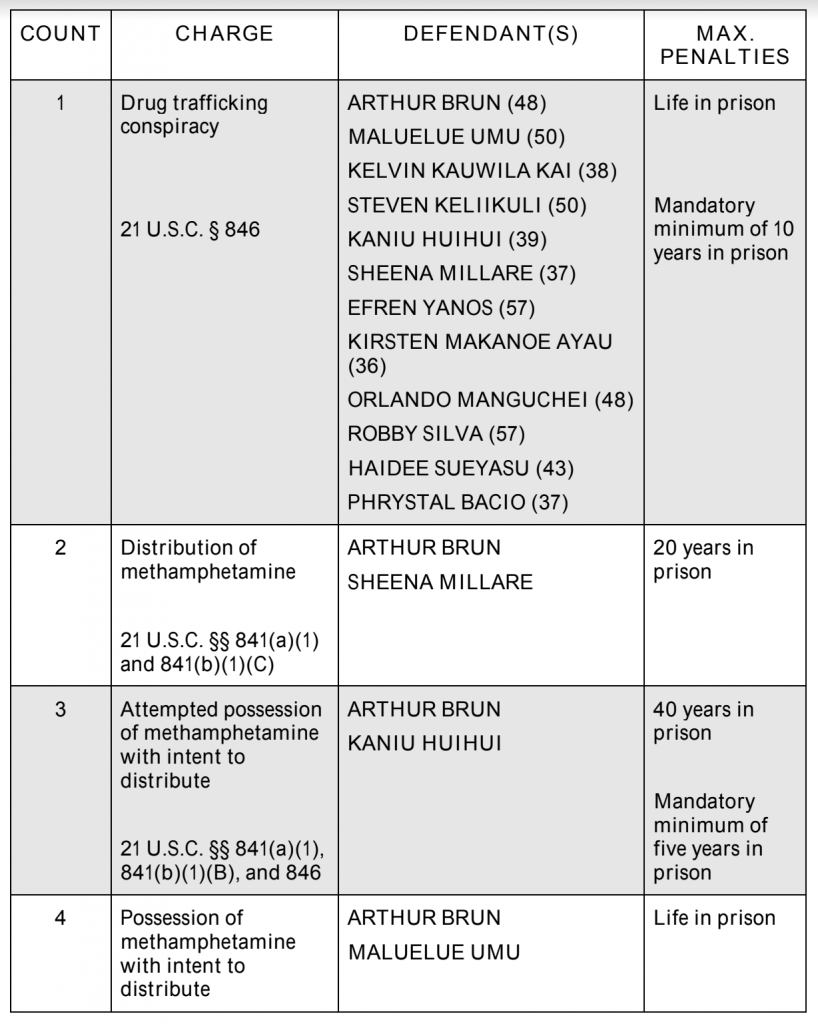 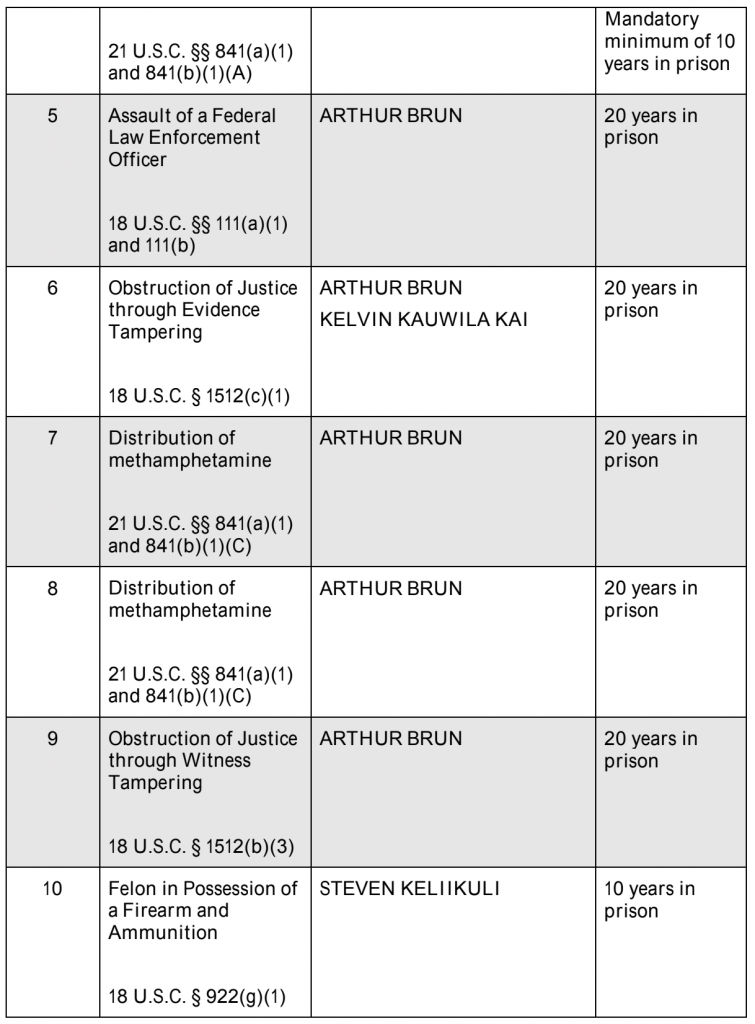 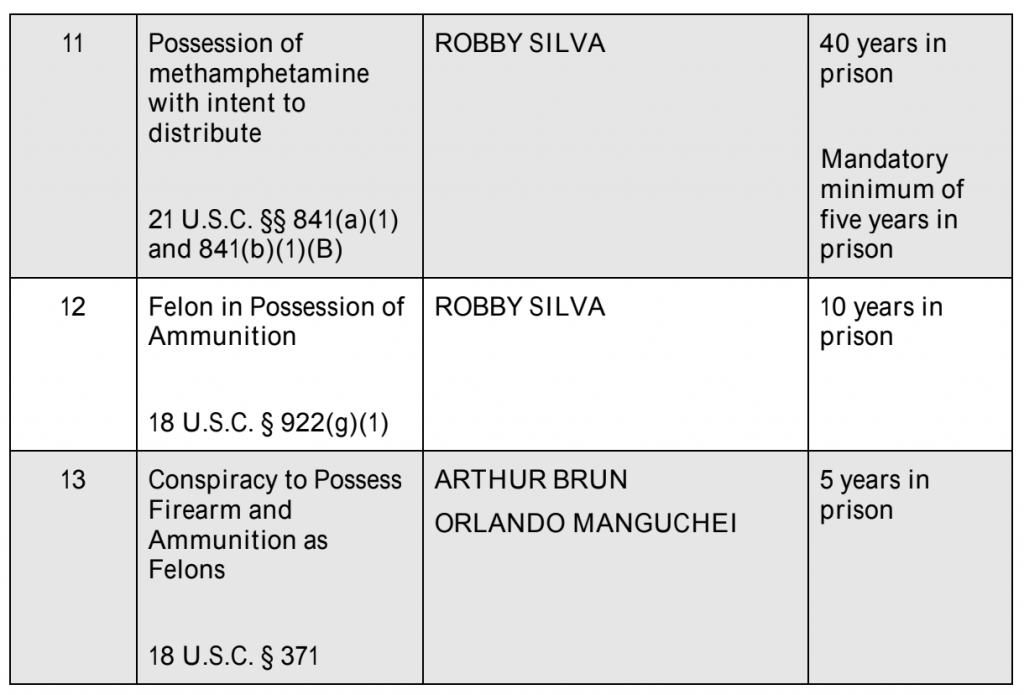 [1] As the introductory phrase signifies, the entirety of the text of the Indictment is merely an accusation and that the defendant(s) are presumed innocent until and unless proven guilty.