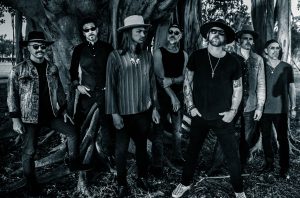 The Maui Arts & Cultural Center will be hosting the first Maui concert for The Allman Betts Band.

The band features the sons of Rock & Roll Hall of Fame inductees Gregg Allman (Devon Allman) and Dickey Betts (Duane Betts) who have joined forces to form The Allman Betts Band. The show features new music, songs from their solo projects and classic Allman Brothers and Gregg Allman tunes in honor of the 50th Anniversary of The Allman Brothers Band.

The concert will be held at the MACCʻs Castle Theater on April 17 at 7:30 p.m. Tickets go on sale to MACC members first on March 11 and to the general public on March 14. Orchestra level ticketed patrons will have access to a special dance floor area in front of the stage.

The Allman Betts Band debut album, Down to the River, a Top-10 entry on several rock charts including #1 on iTunes Rock, was released last year. Former Allman Brothers Band keyboardist and current Rolling Stones keyboardist, Chuck Leveall, and former Greg Allman Band Hammond B3 player, Peter Levin, both guested on the album. The band’s sophomore effort is due out early this summer.