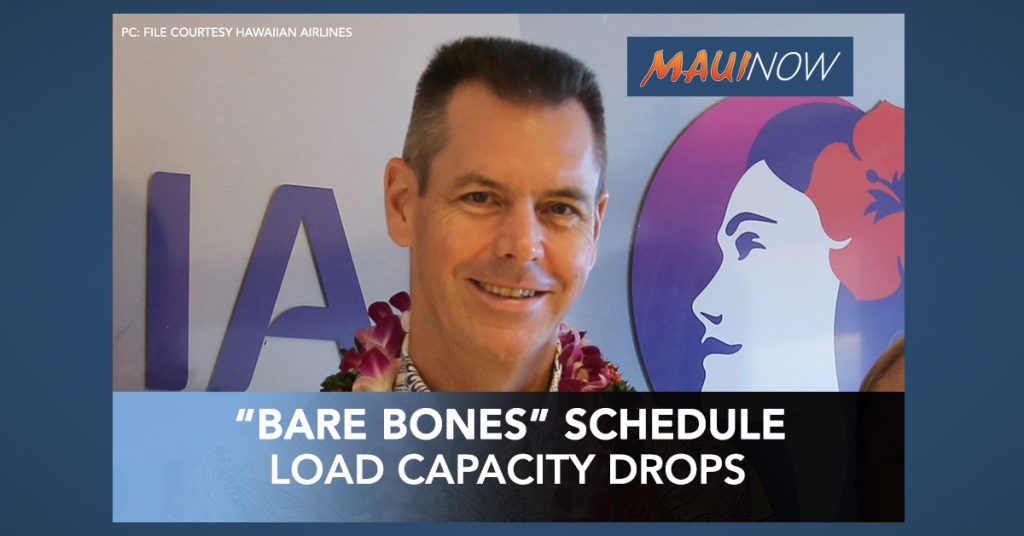 With Governor David Ige’s announcement yesterday for a mandatory 14-day quarantine for all travelers arriving in Hawaiʻi starting Thursday, Hawaiian Airlines announced a reduction in flight schedules to a ‘bare bones level,’ after Wednesday.

“I know I speak for every single one of our 7,500 employees when I thank the first responders and medical professionals in Hawaiʻi who are fighting this disease,” said Ingram.

“Our responsibility to our guests is to make sure we get them back home.  This includes both guests that are here now and residents who are traveling and want to return to Hawaiʻi.  We understand that this action is motivated by a desire to restrict travel to and from our state. We anticipate adjusting our domestic and international flying schedules to a ‘bare bones level’ after Wednesday,” said Ingram.

Load Capacity from US West Coast and Japan Drops

The number of visitors to Hawaiʻi in 2019 was about 10 million visitors, according to company executives.

“Right now our daily passenger loads are far lower than that.  Typically our flights from the West Coast and the western US–which is the largest visitor market by far–would have load factors of about 90 percent.  So 90 percent of the seats on every flight (would be) full.  In recent days, those have been running in the 40s and 50s,” said Ingram of Hawaiian Airlines.

“We saw a fairly dramatic drop in advance bookings as the news flow around the country has accelerated in recent weeks.  In particular, with the Governor’s announcement earlier this week to dissuade the public from visiting the islands, we’ve seen load factors drop even further–into the 30s looking into next week.”

Ingram said there’s already been a significant drop in demand from Japan as well, which is the largest international market served by Hawaiian Airlines. Flights are typically 90 percent full, but over the next several weeks, have dropped to the 20% range in some cases, according to Ingram.

“I suspect that most people, when they become aware of this news, that they are going to chose to postpone their vacation to Hawaiʻi.  I don’t think there’s much appetite for spending 14 days in a hotel.  As much as people like visiting a hotel, they come to Hawaiʻi to sleep in the hotel and spend a lot of their time out of their room,” said Ingram.

Ingram said this one case was not related to any of the three travelers who later tested positive after having traveled on Hawaiian Airlines.

“‘Hawaiʻi flies with us’ isn’t just a motto.  We provide essential services on neighbor island routes such as moving blood for the blood bank, transporting doctors and patients, stevedores and utility workers.  We will keep a neighbor island schedule operating, but it will be much more limited than our typical 180 flights per day,” said Ingram.

“I also want to recognize the men and women on our front lines–our pilots, flight attendants and airport personnel–who have continued to serve our guests with hospitality during these very difficult times,” said Ingram.

“I join the governor and every one of my colleagues here in the hope that Hawaiʻi can contain this illness quickly.  We stand ready to support this effort,” said Ingram.