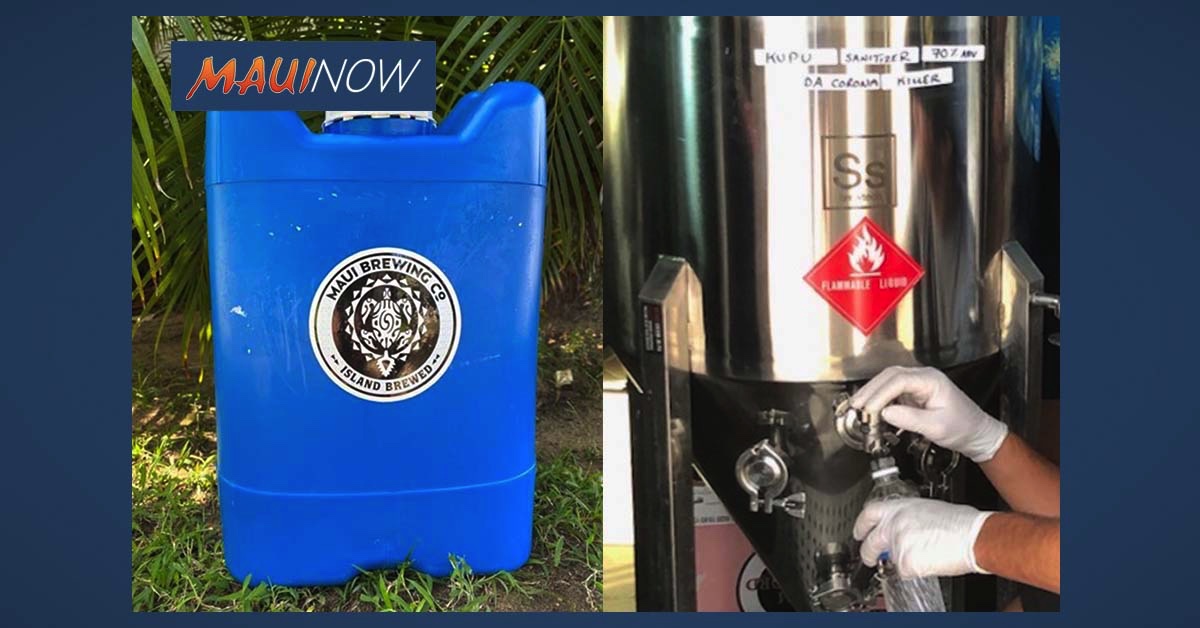 The Maui Liquor Department is reportedly investigating a complaint against the Maui Brewing Company for allegedly using the sales of products, in which patrons were reportedly given free hand sanitizer with purchase, Mayor Victorino said.

Owner Garrett Marrero tells the Honolulu Star Advertiser that the complaint is “in poor taste” given the situation surrounding the pandemic.  Marrero provided us with additional information this evening noting that the business did not offer anything free in relation to the sale of alcohol.

The free sanitizer was “with any purchase,” and was not used to incentivize the sale of alcohol, according to Marrero. He said, noting that the company makes more than just beer including food, coffee, sodas and retail items.  “We’re innocent.  We didn’t do anything wrong.  The department should be spending time on other issues, and not penalize businesses that are providing a desperately need service.”

Mayor Victorino provided some background on the case during media questioning on Monday afternoon:

“At this time it is under investigation.  And we are doing the proper steps.  Trust me, I believe Garrett has done a great job helping us, but there are laws that still exist and has to be abided by.  At this point, let the investigation take its course.  I’m saying that we will make it a fair investigation, and whatever we can do to resolve it as quickly as possible is what I’m asking for.”

During the initial coronavirus response effort, the company was credited with donating hand sanitizer made in-house to first responders, including Maui Police, and Kupu Spirits Hand Sanitizer for kupuna served by Na Hoaloha.

Many stores at the time were out of product and the company was among the first on island and in the state to use resources on hand to meet this critical need.

To date, the Maui Brewing Company has produced more than 3,000 gallons of sanitizer, and donated more than 1,000 gallons of that.  Most of the initial donations went to front line workers and first responders, as well as nonprofit physician groups and kupuna care.

In the beginning the company donated a few hundred gallons to anyone in need, but as the need remained, the company bought ingredients and sold the product to businesses that had a budget for sanitizers.  While the company continued to donate sanitizer to nonprofit groups, it also sold the product to essential businesses like banks, the electric company and other for-profit business that continued to be paid for the services they provided and could afford the extra expense.

According to Marrero, he was told that someone within the department had read or seen an article from a mainland brewing magazine and heard that the Maui company was producing sanitizer.

Marrero said that instead of the department seeking clarification and getting into a positive discussion, he felt like he was being “pushed into a corner” by an investigator who he said called at 9:30 at night on a Sunday.

In a Maui Police Department post to Facebook on March 21, the department thanked the restaurant and brewery for their donation, and wrote: “After placing your carryout order with Maui Brewing Co make sure you bring a clean, sealable container, and they’ll send you home with up to 16 oz of sanitizer for free.”

*Editor’s Note: Maui Now reached out to Liquor Department early this afternoon, but received no response by the time of this posting. We revised this story after getting additional information from Marrero this evening. This clarifies an earlier version of this post.