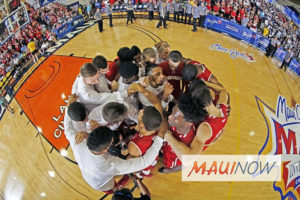 Butler, Chaminade, Houston, Notre Dame, Oregon, Saint Mary’s, Texas A&M, and Wisconsin convene in Maui for the 38th annual Tournament, which will be contested Nov. 22-24 at the Lahaina Civic Center on the island of Maui.

“The 2021 field is no exception, and we are extremely excited to welcome these teams to the Lahaina Civic Center.”

Four of the eight participating teams finished the 2019-20 season in the AP Top 25 rankings (Oregon, Wisconsin, Houston, Butler). Two of the 2021 participants are ranked in the top 35 all-time winningest schools, including Notre Dame and Oregon. Houston, Notre Dame, and Wisconsin rank in the top 50 programs with the most NCAA Tournament appearances, with 21, 36, and 24, respectively. Oregon, Saint Mary’s, and Wisconsin all rank in the top 20 winningest teams of the last decade.

Seven out of the eight teams in the 2021 field will be making a return appearance in Maui; Saint Mary’s will be making their first-ever appearance. Notre Dame is the only returning program to have earned a Maui Jim Maui Invitational championship title, having done so in their most recent appearance in 2017.

Teams that have participated in the Maui Jim Maui Invitational throughout the event’s history own 69 of the 81 NCAA championships. Seven schools have gone on to win the national championship after competing in Maui earlier in the season.

About the 2021 Championship Round Teams