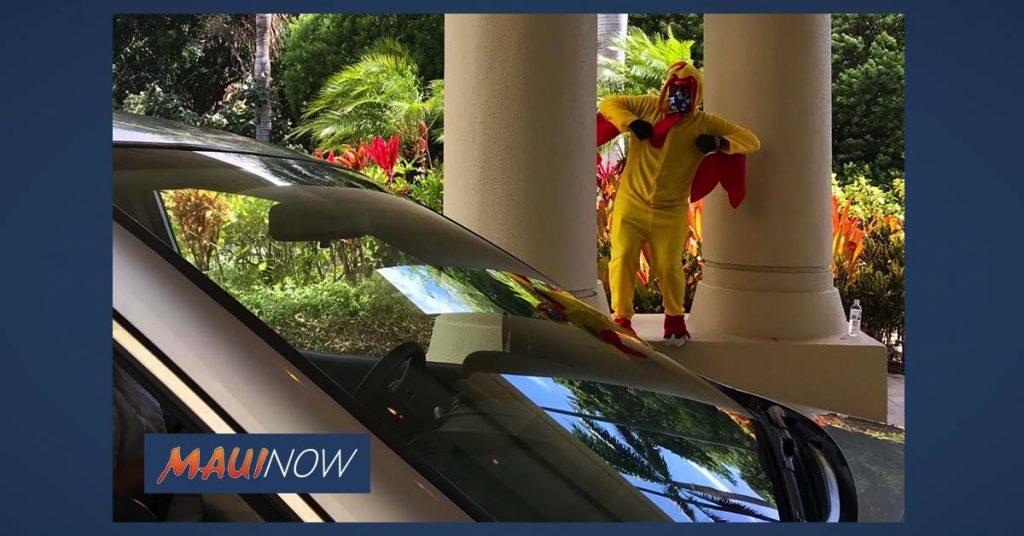 Hundreds of hospitality workers at Four Seasons Resort Maui at Wailea were gifted with food and essentials during a two-day food drive on May 6 and 7.  The food drive benefitted approximately 650 of the Resort’s employees.

The remainder of the 800-person workforce decided they wanted to “pay it forward,” and their allocation was donated to the Maui Food Bank. The donation included 174 10-pound bags of rice, 80 whole chickens and over 300 pounds of vegetables.

“It’s been such a challenging time since we temporarily suspended operations in late March,” said General Manager Marc Bromley, who said he checks in with his employees daily through Zoom and phone calls, text messages, emails and even handwritten notes home.

The Executive Team showed up to execute the distribution: General Manager Marc Bromley and Director of Marketing Mark Simon donned head-to-toe chicken suits to greet employees. Employees were greeted by masked and gloved volunteer coworkers holding signs with messages of virtual hugs and directing them to “honk to see the chicken dance.”

“We wanted to bring fun, smiles and laughs to an otherwise very serious situation,” said Bromley.

The Resort’s gift included a 10-pound bag of rice, whole chicken and an assortment of produce to make Roasted Chicken and Chicken Fried Rice, two recipes developed by Executive Sous Chef Andrew Whiteside specifically for the food drive. He also harvested ingredients from the Chef’s Garden, which were included in the care package for a signature Four Seasons touch.

“It was really important to connect, despite the masks and social distancing. We were able to spread lots of good vibes and make sure our employees know they remain top of heart and mind.  It’s important that our employees know we’re in this together, even if we are not able to see each other as often as we typically would,” said Bromley. “The energy was that of love, aloha and optimism. I’m confident we’ll come out of this even stronger than before.”