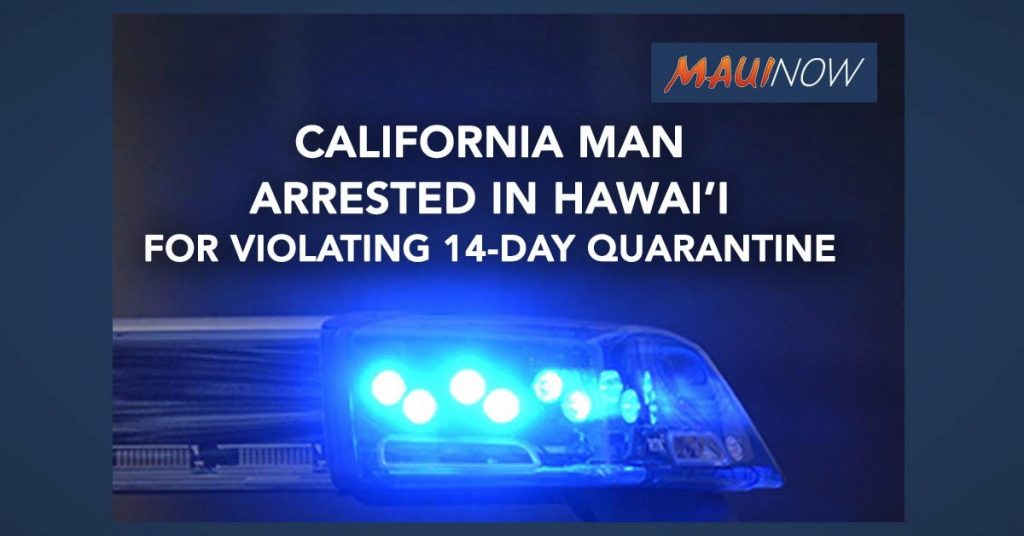 Social media postings and citizen tips again resulted in the arrest of visitor for violation of Hawai‘i’s mandatory 14-day self-quarantine rule for all incoming visitors and returning residents.

Abdulla Aliyev (aka Turgut Aliev), a citizen of Azerbaijan, who lives in Reseda, CA was arrested early Saturday afternoon at the Daniel K. Inouye International Airport, one hour before he was scheduled to catch a flight to Los Angeles. At 11:30 a.m. he allegedly blogged that he was at the airport and was leaving in a few hours.

He is charged with violating the 14-day quarantine and unsworn falsification to authority. He was taken into custody by officers from the Airport Sheriff’s Division after they were alerted to his impending departure by Special Agents from the Investigative Division of the Department of the Attorney General.

It’s reported Aliyev arrived on O‘ahu on May 1 and immediately began leaving an Airbnb condominium that he’d rented on Kūhiō Avenue in Waikīkī. Special agents say his social media posts showed him on the beach, at Diamond Head, at Foster Botanical Garden and at other locations across the island. He also blogged while riding the bus.

The attorney general’s special agents searched for Aliyev daily, after being alerted to his activities by citizens who had been monitoring his social media posts. In response to one of his posts, in which someone wrote him to tell him he was violating Hawai‘i’s COVID-19 Emergency Rules, he responded, “I know, that’s why Honolulu PD gave me a $460 ticket.” This was a false statement. Aliyev was booked on the charges and bail was set at $2,000

State Attorney General Clare Connors said, “We and most people in Hawai‘i have little tolerance for anyone, either a visitor or returning resident, who flouts the emergency rules currently in place to protect everyone and to help keep the coronavirus infection rate in Hawai‘i low. If you are out and about in violation of a self-quarantine order, it is likely you will be reported and arrested. We again implore visitors to delay their trips until this pandemic passes and we ask that anyone who arrives here comply with the 14-day self-quarantine rule. Being arrested, and potentially paying thousands of dollars in fines or spending a night in jail, is not the way to begin or end a vacation. And, if you are a returning resident who violates, you can expect the same upon return if you fail to comply with rules to keep our community safe.”