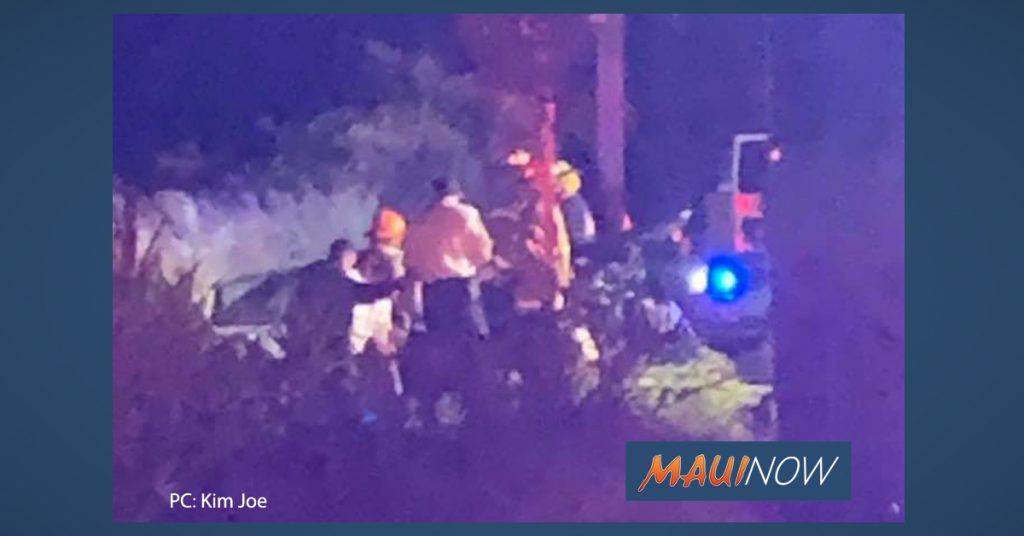 Police arrested a Maui woman on Monday afternoon following a grand jury indictment related to a fatal motor vehicle crash in Hāliʻimaile last year that claimed the life of a Texas woman.

Police say Kailey Amber Duarte, 24, of Haʻikū, was arrested at around 3:25 p.m. on Monday, June 20, 2020 by officers with the Maui Police Department Traffic Division, Vehicular Homicide Unit.  She was charged with manslaughter, three counts of first degree negligent injury, and one count of second degree negligent injury.  Duarte was being held in lieu of $234,000 bail.

The charges stem from a June 16, 2019 crash on Hāliʻimaile Road that claimed the life of Teresa Pham, a 39 year old woman from Spring, Texas.

According to police reports, the crash occurred at around 9:22 p.m. on Sunday, June 16, 2020, on Hāliʻimaile Road, approximately 0.1 mile southwest of Hoʻomalie Place in Hāliʻimaile on Maui.

Police say the Honda Accord continued on a path still traveling left of center, and collided head-on with a grey Nissan four door sedan traveling northwest on Hāliʻimaile Road.

According to police, the driver of the Honda Accord was Duarte.

Pham was a passenger in the Nissan sedan.  Police say she sustained fatal injuries as a result of this crash and died at the scene.

Lt. William Hankins, Commander of the Traffic Division said, “Motor vehicle crashes that involve a fatality are very complex and time consuming investigations. Our team of investigators spent countless hours to conduct a complete and detailed reconstruction of this crash to determine the speed of the vehicles involved, as well all factors that contributed to this preventable crash and untimely death of Teresa Pham.”