No Tsunami After 4.7 Hawai‘i Island Earthquake 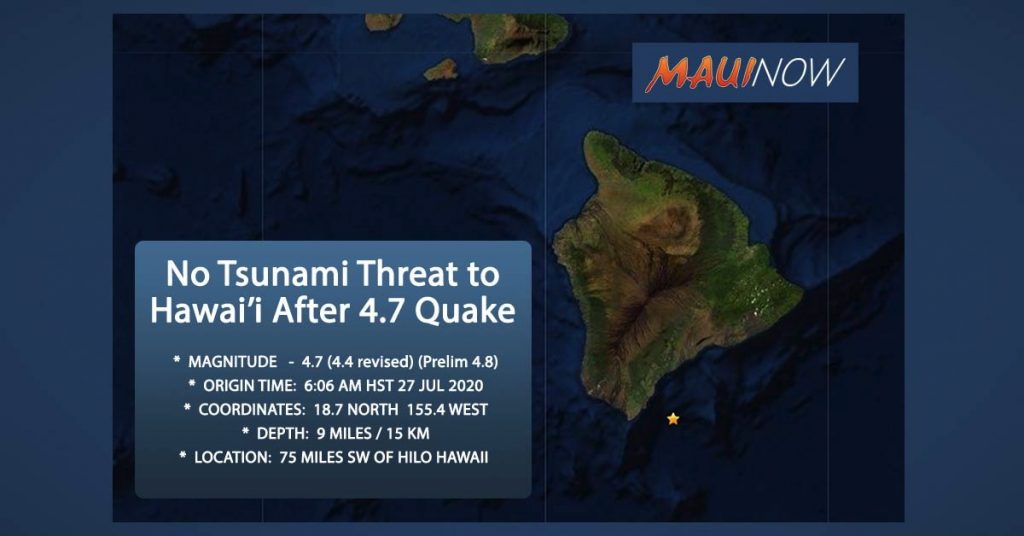 There is no tsunami threat to Hawaiʻi after a 4.7 (revised by scientists from 4.4; preliminary magnitude was 4.8) earthquake reported at 6:06 a.m. on Hawaiʻi Island, about 75 miles SW of Hilo, according to the Pacific Tsunami Warning Center.

The quake occurred at a depth of 9 miles.

There were initially nearly 60 felt reports from individuals who reported feeling the quake on Hawaiʻi Island, according to tracking by the USGS.  Most reports were in the Kailua Kona area.  A subsequent check shows that the USGS “Did you feel it?” service received more than 400 felt reports within the first hour of the earthquake, according to the HVO

The US Geological Survey’s Hawaiian Volcano Observatory notes that the depth, location, and recorded seismic waves of the earthquake suggest a source “due to bending of the oceanic plate from the weight of the Hawaiian island chain,” a common source for earthquakes in this area.

HVO acting–Scientist-in-Charge, David Phillips, said the earthquake had no apparent effect on Kīlauea or Mauna Loa volcanoes. “We see no detectable changes in activity at the summits or along the rift zones of Mauna Loa or Kīlauea as a result of this earthquake. Aftershocks are possible and could be felt.”

Again, no tsunami is expected.

The USGS reports that the earthquake was located: