No Tsunami Expected After 4.0 Hawai‘i Earthquake in SW Rift Zone of Kīlauea 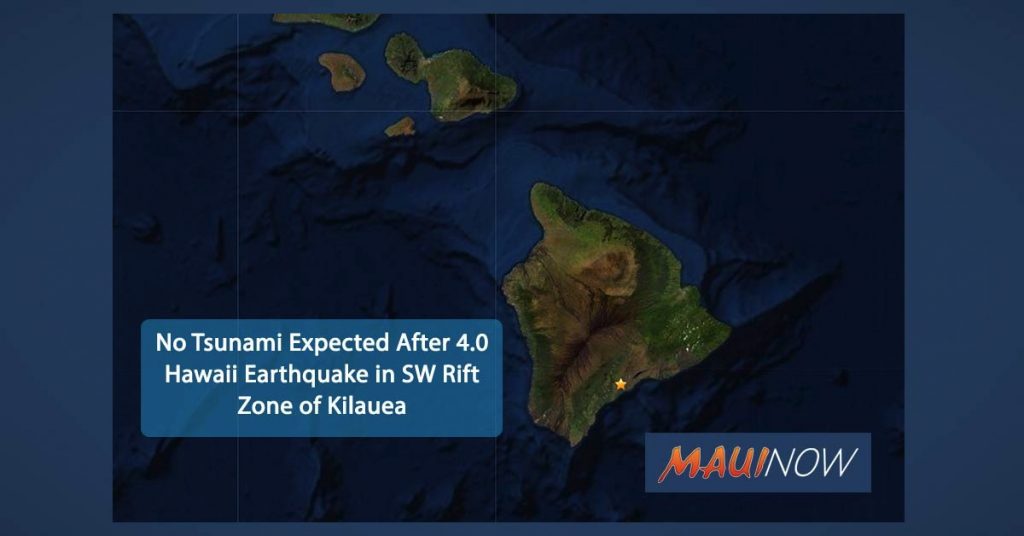 There is no tsunami expected following a 4.2 (preliminary magnitude 4.0) earthquake reported in the SW rift zone of the Kīlauea Volcano on Hawaiʻi Island.

The Pacific Tsunami Warning Center says there is no tsunami expected, however some areas may have experienced shaking.

The earthquake had no apparent effect on Kīlauea or Mauna Loa volcanoes, according to US Geological Survey’s Hawaiian Volcano Observatory geophysicist, Jefferson Chang. “This earthquake appears to be part of the seismic swarm under the Pāhala area, which has been going on for over a year. Out of over ten thousand earthquakes that were detected in the area, a few have been large enough to be felt. We see no detectable changes in activity at the summits or along the rift zones of Mauna Loa or Kīlauea as a result of these earthquakes,” said Chang.

The HVO notes that earthquakes beneath Kīlauea’s lower Southwest Rift Zone are produced mostly at depths of 15-25 miles, beneath the town of Pāhala and extending about 6 miles offshore. Earthquakes in this region have been observed at least as far back as the 1960s and are posited to be related to deep magma pathways under the island, according to the HVO.

The USGS reports the quake was located: