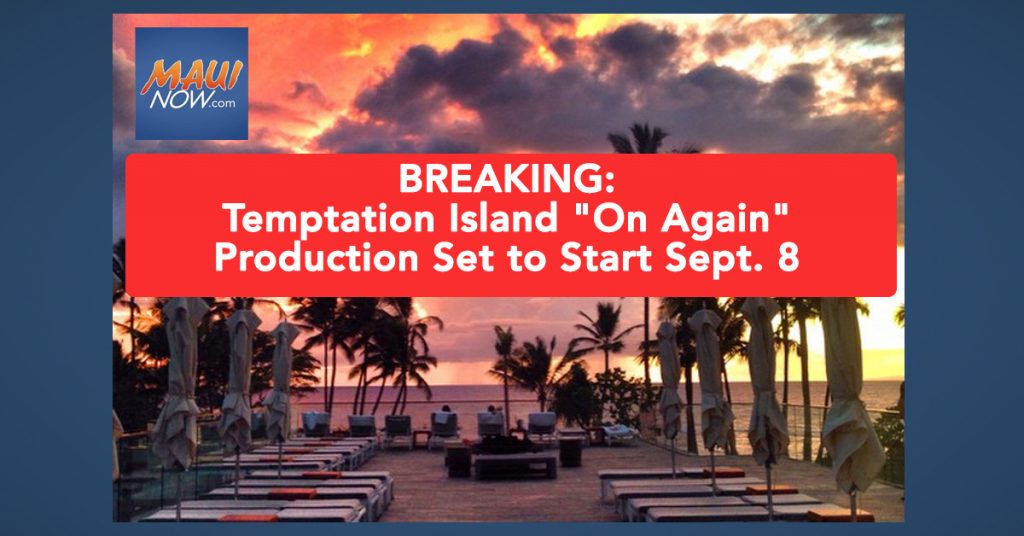 Maui Mayor Michael Victorino announced this afternoon that the television production, Temptation Island, is “on again,” with production set to start on Sept. 8.

“We have just received the governor’s approval of the county’s updated public health emergency rules,” said Mayor Victorino.  “After a lot of extensive review of the whole process… the safe way forward report which was prepared by the entertainment industry was very extensive, broad based and I think really ready to go.”

“This may be the first test of many tests that we will be able to perform,” said Mayor Victorino.

Trade Winds Productions who is doing the filming of Temptation Island is the first show to receive approval and authorization here in Maui County.

Mayor Victorino said the production has extensive safety protocols that includes teams of medical professionals on site during the course of filming.

According to the Mayor, this will bring back 140 workers to the Andaz during the filming over the course of two and a half months.

“The production company will be shooting entirely on the property of Andaz and if they decide or want to request outside of Andaz, to do something in the communities I will definitely hold a Zoom meeting to ensure the communities are aware that they are coming and if they feel comfortable having them there,” said Mayor Victorino.

“The production provides safe and responsible framework for our residents to return to work and to start to rebuild our local economy,” said Mayor Victorino.

The Mayor’s office notes that Trade Winds Production has secured exclusive use of the Andaz Maui at Wailea Resort property, which does not include the beach. The beach will continue to be open and accessible to the public, according to the mayor.

Tuia’ana Scanlan, President of IATSE Local 665 said, “For this specific project, they have gone above and beyond anything we’ve seen before.  Far and away some of the most robust and comprehensive COVID safety protocols and guidelines across the board, and that’s not even for our industry. You’d be hard pressed to find any industry outside of clinical or medical facility that tests with the same regularity that this production is planning to do.”

Maui Film Commissioner Tracy Bennett said, while the content may not please everyone, “it certainly is your right to change the channel.”  He said, “We do not dictate content because to do so would be infringing on First Amendment rights. By design, this production does not advertise that they are in Maui.  They do not shoot Maui signage and they make no mention of Maui during the filming.  They are not breaking the law.  They are not desecrating the land.  They are not portraying our island, our community or the culture in a negative light.”

He continued saying he knew it would be tough for any production to be the first to shoot again on Maui in the midst of this pandemic and there would be differences of opinion on restarting any production here.  “But we all had the same interests at heart, we would not put any local or distant hired crew in harms’ way.  We feel confident production can offer an extremely safe filming environment and simultaneously create jobs for hundreds of people who are eager to get back to work,” he said.

“It is important that people remember that the success of this model will certainly lead to other productions coming to Hawaii and Maui specifically and will increase the number of production and hotel worker job opportunities,” said Bennett.

He said local businesses will benefit also with productions (that) need to procure local goods and services to support their work in the islands.

According to Bennett, production costs for Temptation Island are approximately $7 million to $8 million per season. “It has a very, very long trickle down effect. Aside from hotel rooms and cast and crew salaries, the production spends money on the following: local catering company staff and locally sourced food, local production company, a scaffolding supply company, tent and rigging companies, lots of concrete, multiple lumber and hardware supply companies, a heavy truck rental company and equipment from Hawaii Stage and Lighting and Hawaii Media Inc.

Bennett said this is not the only production for Maui.  “There is another production of similar size–not a reality show–that wants to come in on the heels of Temptation Island and continue our people working, continue opening the hotels as we slowly open from this pandemic. Temptation Island and their host network USA Network, will be making donations of Cromebooks to our schools as well as donating PPE equipment to Maui Memorial hospital,” said Bennett.

Hawaiʻi State Film Commissioner Donne Dawson provided a statement saying, “We are confident this production will succeed in providing the safest possible work environment for the all the employees involved. Their success is important for the entire film industry and the studio backed productions that are wanting to follow their safety model. The production’s small self-contained footprint also helps protect Maui’s environment from potential impacts, while boosting local economic activity. According to our department DBEDT, every $50,000 spent represents approximately 30 visitors. So using this production’s roughly $7.5M spend on Maui, that would equate to about 4,500 visitors on the island.”