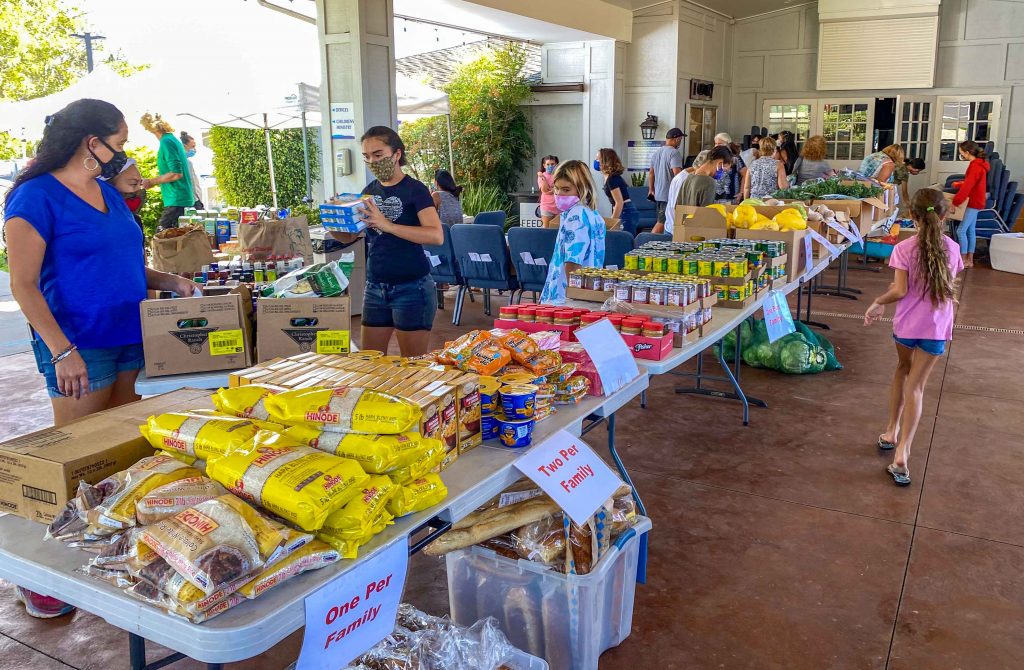 Volunteers set up the weekly food distribution for people impacted by the COVID-19 pandemic at Waipuna Chapel in Kula. Photo Credit: Cammy Clark 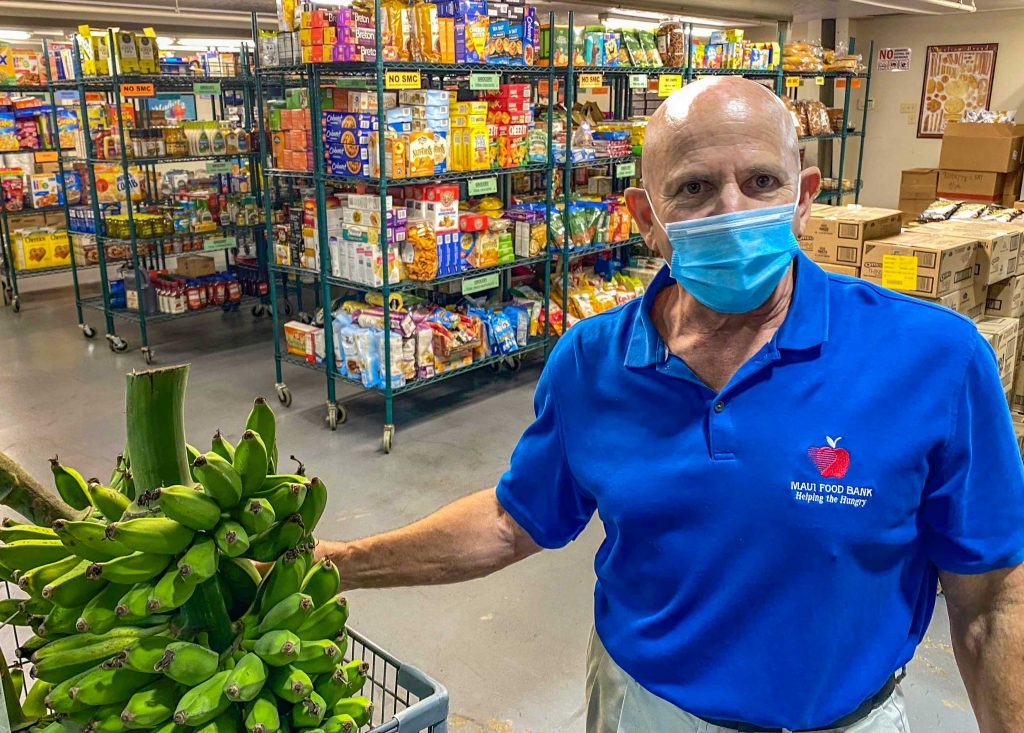 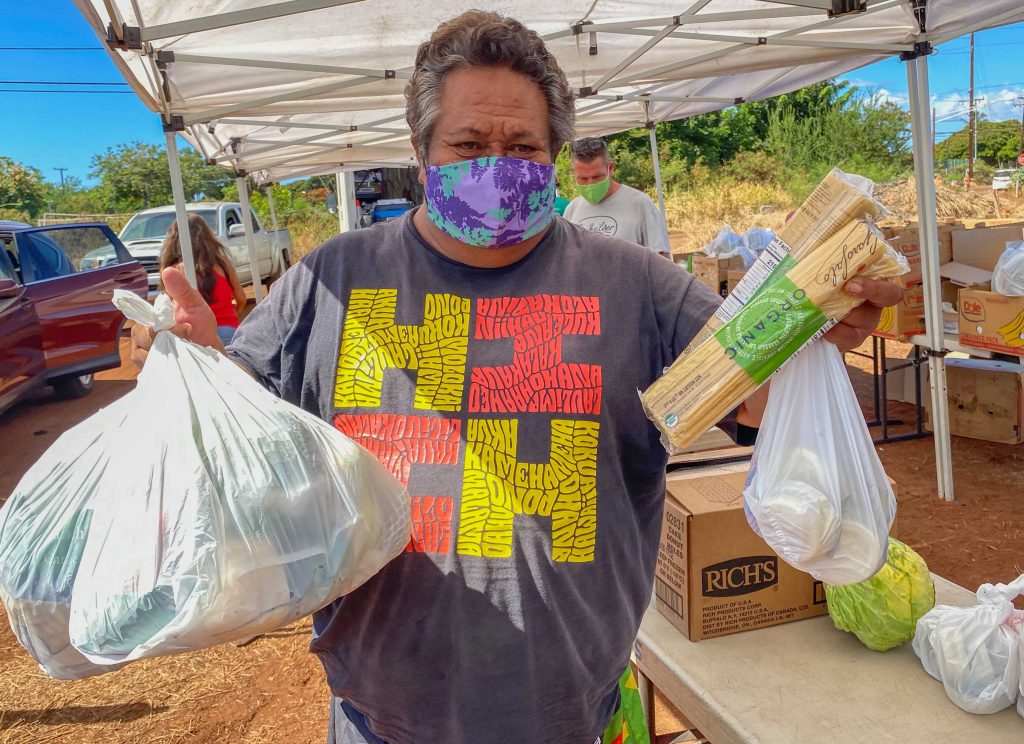 Ulu Nahooikaika of Olawalu picks up much needed food to help him while he is unemployed due to the Covid-19 pandemic. Photo Credit: Cammy Clark 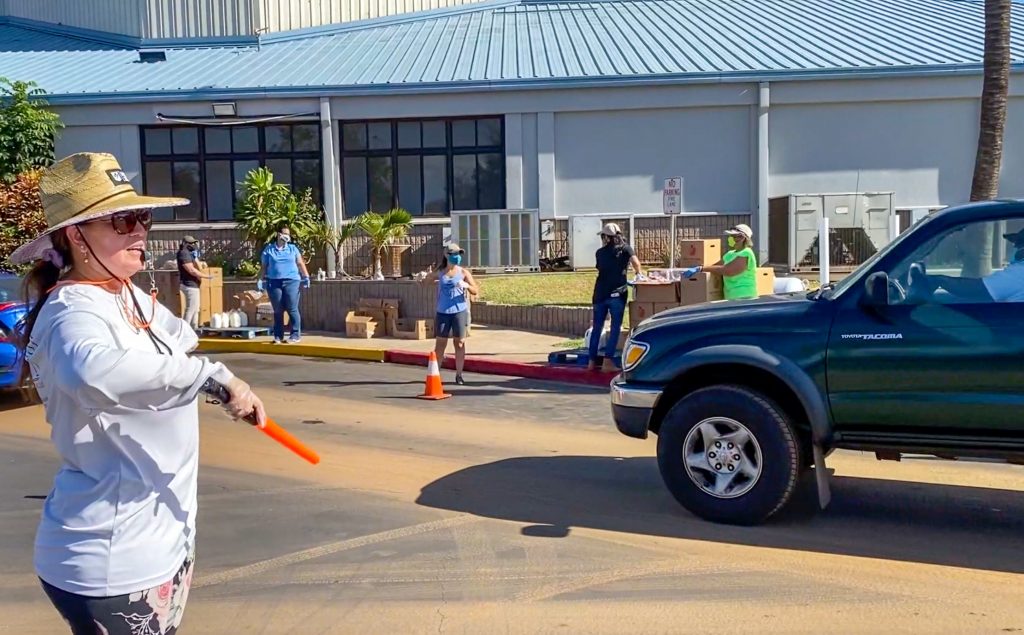 Well before the sun appeared above Haleakalā, at 4:45 am last Thursday, the first car arrived nearly four hours early for a food giveaway at King’s Cathedral in Kahului. Volunteer parking attendants squeezed about 600 more vehicles, bumper-to-bumper, into the large field waiting area.

At 8:30 am, the first cars in queue were directed to the front of the church, where more volunteers manned 10 stations to hand out the food for the day: one gallon of milk, 18 eggs, about 5 pounds of ground beef and a large bag of fresh rolls.

“We’ve been doing this weekly for almost eight months now,” said King’s Cathedral Assistant Pastor Glenn Foo Sum. “The need is so great – and growing. We started out with about 300 cars and now we do almost 1,000 on Thursday mornings and Friday afternoons.”

Hundreds of cars also lined up last Thursday morning for food giveaways at Lahaina Baptist Church, the Kihei Baptist Church and on private property in Lahaina for an allocation by Feed My Sheep Maui, which serves people who do not make more than 200 percent of the USDA poverty level. On Thursday afternoon, people stood in line at the Waipuna Chapel distribution in Kula.

Since mid-March, when the Covid-19 pandemic led to an abrupt shutdown of Maui’s tourism economy, emergency food distribution sites have sprung up at more than 30 locations around the island, and on Molokaʻi and Lanai.

While residents’ needs for food has ebbed and flowed based on government assistance availability, it hasn’t gone away. Far from it. Maui County’s unemployment remains the highest in Hawaiʻi – and among the highest around the country – at 20.7 percent, according to the state Department of Labor and Industrial Relations. 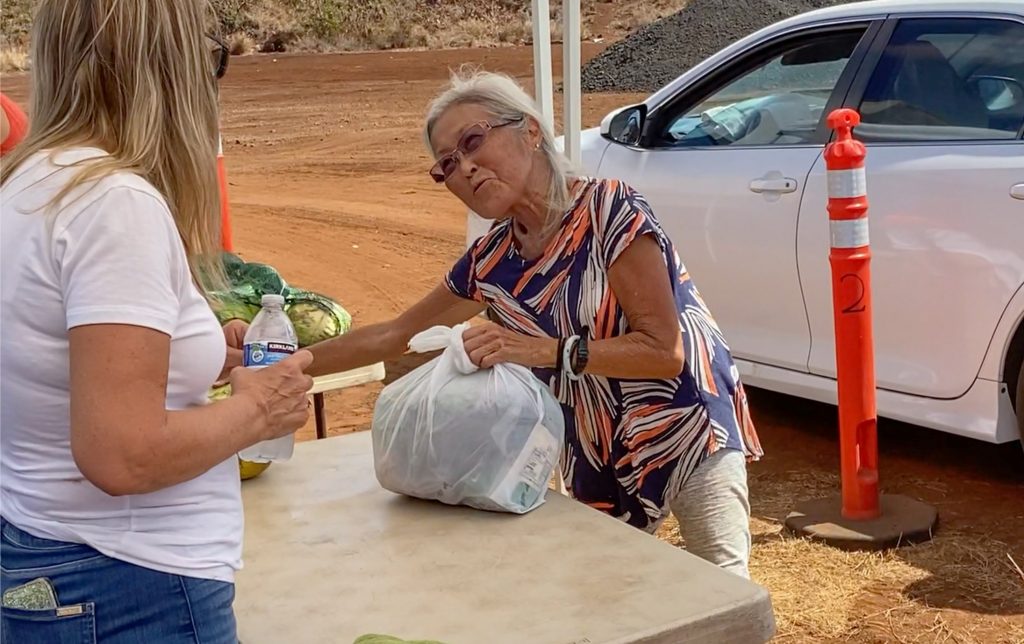 A woman is thankful for the food she received at the Feed My Sheep Maui food distribution in Lahaina in September. Photo Credit: Cammy Clark 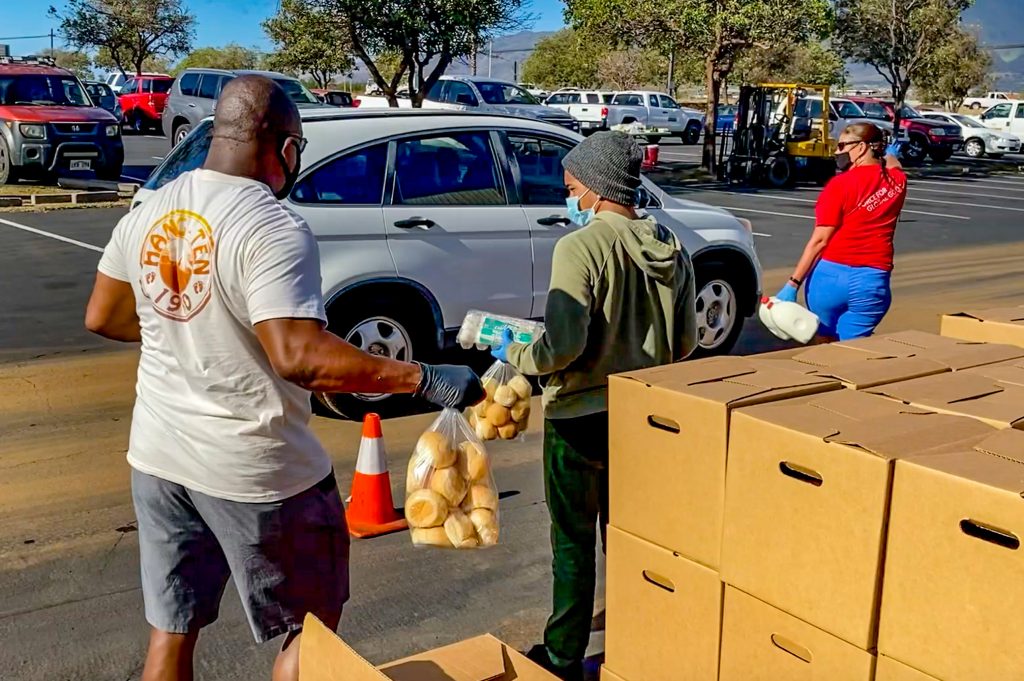 Volunteers hand out food during a giveaway at King’s Cathedral in Kahului. Photo Credit: Cammy Clark 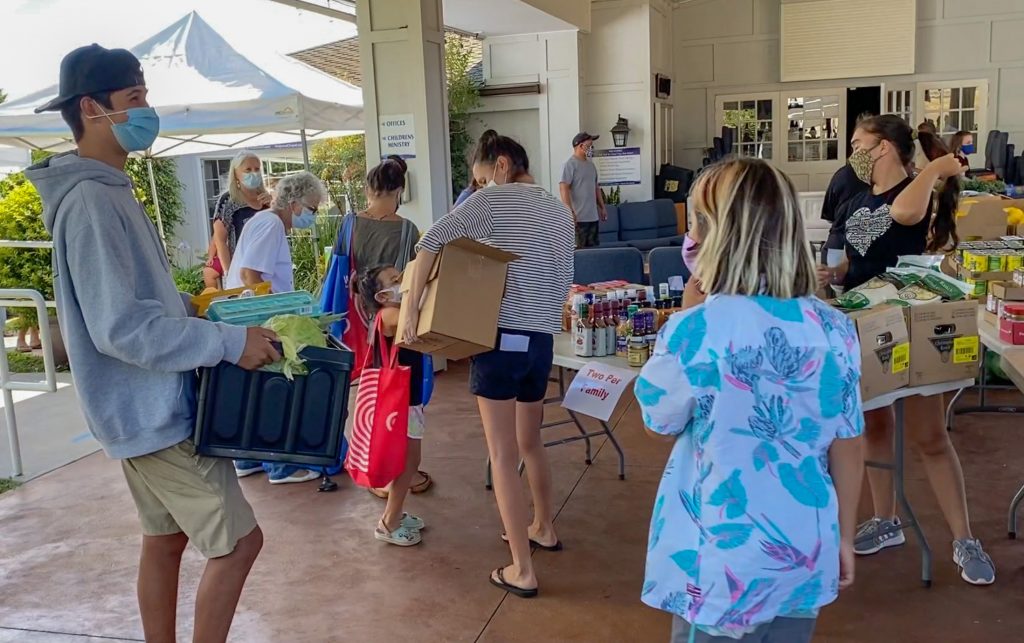 Children are among the volunteers who help at a food distribution at the Waipuna Chapel in Kula. Photo Credit: Cammy Clark 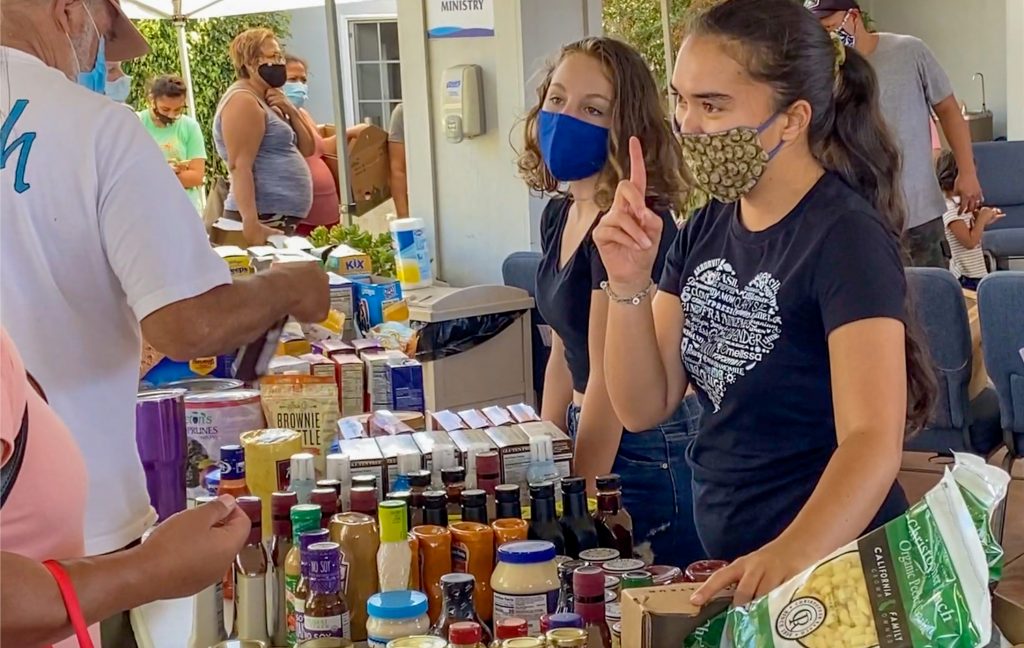 Volunteers give out food at the Waipuna Chapel in Kula. Photo Credit: Cammy Clark

“There’s been so much hardship because of the pandemic,” Ulu Nahooikaika of Olawalu said after loading several bags of fresh produce, organic spaghetti and other items at the Feed My Sheep Maui location in Lahaina. “I lost my job as an entertainment performer. I’m behind on a lot of my bills. I say thank you for helping us out.”

The Maui Food Bank has been supplying a majority of the goods for the food giveaways and to stock local food pantries. Demand has increased so much since March that the food bank recently leased a 10,000-square-foot warehouse to stage and pack items for family food boxes.

The food bank also used to purchase from one mainland supplier, Tennessee-based Second Harvest. Now Wright says he is juggling container shipments form seven suppliers. The ongoing COVID-19 pandemic has led to food banks and other organizations across the United States all vying for limited resources.

Among the items hard to come by is a Hawaiʻian favorite, Spam.  And, Wright added: “I wanted to bring in ham for Thanksgiving and I’ve been trying to get it for three months.”

The Maui Food Bank has been allocated about $1.5 million in federal funding from the CARES (Coronavirus Aid, Relief, and Economic Security) Act. “That pays for about two months of food purchases,” food bank Executive Director Richard Yust said.

In 2019, the Maui Food Bank purchased four containers of about 40,000 pounds of food each from the mainland. “I have three containers coming in just this week to meet the demand,” Wright said.

For just the period of late September to Nov. 2, the food bank has purchased 15 containers from mainland suppliers to meet the current need and to stock up for the expected increase for the upcoming holidays. “Never in my wildest dreams did I ever think I would need to order a container of just rice every month,” Wright said.

From April to August, the food bank distributed 790,000 pounds of produce. It’s 130,000 pounds more than it did in all of 2019. To meet that increased need, the food bank has gone from purchasing produce from four local farmers to 20.

At the beginning of the crisis, hotels and restaurants, which were forced to close, donated a lot of their unused food. The food bank still has some boxes of airlines snacks from Hawaiian and Southwest. That initial influx of goods helped fill the gap in need until government assistance became available. In-kind donations from retailers and others continue, but at lower levels. Funding also comes from monetary donations from the public, including $100,000 from the Valenzuela Foundation that helped fuel others to contribute.

“But there never is enough funding” Yust said. “The overwhelming need continues until … until we don’t know when.”

The food bank has had to be creative during the pandemic because pubic safety issues have prevented the usual food drives, including an annual campaign with the US Post Office. The food bank now has a virtual food drive with people able to purchase items for donation online. Some people still donate directly. Last week, a woman from a Haiku citrus farm walked into the warehouse and donated four boxes of star fruit.

It literally has taken a small Army of volunteers to help with all the weekly and monthly food distributions. Ilonemica Dacany is one of eight members of the Hawaiʻi Army National Guard who helped with traffic control at the Feed My Sheep site in Lahaina.

Assistant Pastor Foo Sum led a prayer for the 26 volunteers, organized by Labor Community Services, who worked together like a well-oiled machine to distribute the food at King’s Cathedral. Many of the volunteers, like the people they serve, have lost their jobs or had their income dwindle due to the pandemic.

“When I saw how many people were lining up, I saw no reason not to come and help,” said January Asbury, who was furloughed from a destination management company. “It’s nice to give back to a community that needs it.”

In Kula, at 3 pm last Thursday, volunteers that included kids aged 7 to late teens finished the set up at what looked like a small grocery store. There was five supersized coolers filled with milk, orange juice, hot dogs and ground beef. There also was a wide variety of produce, canned goods, fresh bread, cereal, tortillas, condiments and even small toys.

Each person that came through the line selected what they would like, with limits placed on some items so there would be enough for everyone. The children helped distribute the food and carry the groceries out to cars in the parking lot.

“I just like to see the joy on people’s faces when we can help them with their bags,” said Anela Tavares, 12. “This COVID-19 thing is really bad and we are just doing what we can.”

After the last of 107 people in line, representing 281 people, left the Waipuna Chapel with their bags of food, the volunteers packed the few remaining items for delivery to a nearby women’s shelter.

Each distribution location carefully rations how much to give each household.

“One of the saddest things for me personally is to have to turn away cars here because we don’t have enough,” Foo Sum said. “Unfortunately, it does happen, but we try hard to make sure it doesn’t.”

Other organizations have tried to help. Paradise Lahaina, in conjunction with the Lahaina Town Action Committee, will conduct its owner “Community Giveback” food giveaway on Monday, Oct. 5 at 8 am in the parking lot at 713 Luakini St.

“I am inspired by the work other organizations and churches continue to do and I wanted to contribute as well,” Mousa Hassan, Co-owner of Paradise Lahaina, said in a news release.