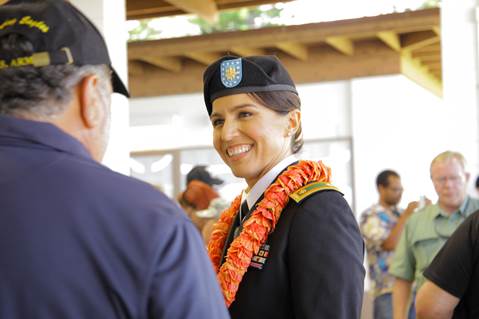 US Representative Tulsi Gabbard (HI-02) will begin four weeks of Army Reserve duty today (Tuesday, Oct. 13), where she will undergo training as a Civil Affairs Officer.

While on duty, Rep. Gabbard’s congressional staff will continue to work on her behalf to serve residents throughout Hawaiʻi through individual constituent casework and coordination with local authorities, as well as continuing policy work in Washington, D.C.

Rep. Tulsi Gabbard has served as a Soldier for more than 17 years, and is a decorated veteran of two Middle East deployments. She has been activated twice in recent years in response to natural disasters and community crises in Hawaiʻi.

In November 2014, Rep. Gabbard was activated and supported Hawaiʻi National Guard efforts as an eruption of Kīlauea lava flow headed toward Pāhoa on Hawaiʻi Island. In May 2018, as lava erupted from fissures throughout Lower Puna neighborhoods, Rep. Gabbard again served in uniform to provide support to a community facing the loss of homes, schools, and livelihoods.

Her current rank is Major and she serves as a Civil Affairs Officer in the US Army Reserves.

Congresswoman Gabbard is serving her fourth term in the US House representing Hawai‘i’s Second District, and serves on the House Armed Services and Financial Services Committees. She previously served on the House Foreign Affairs Committee and Homeland Security Committee.