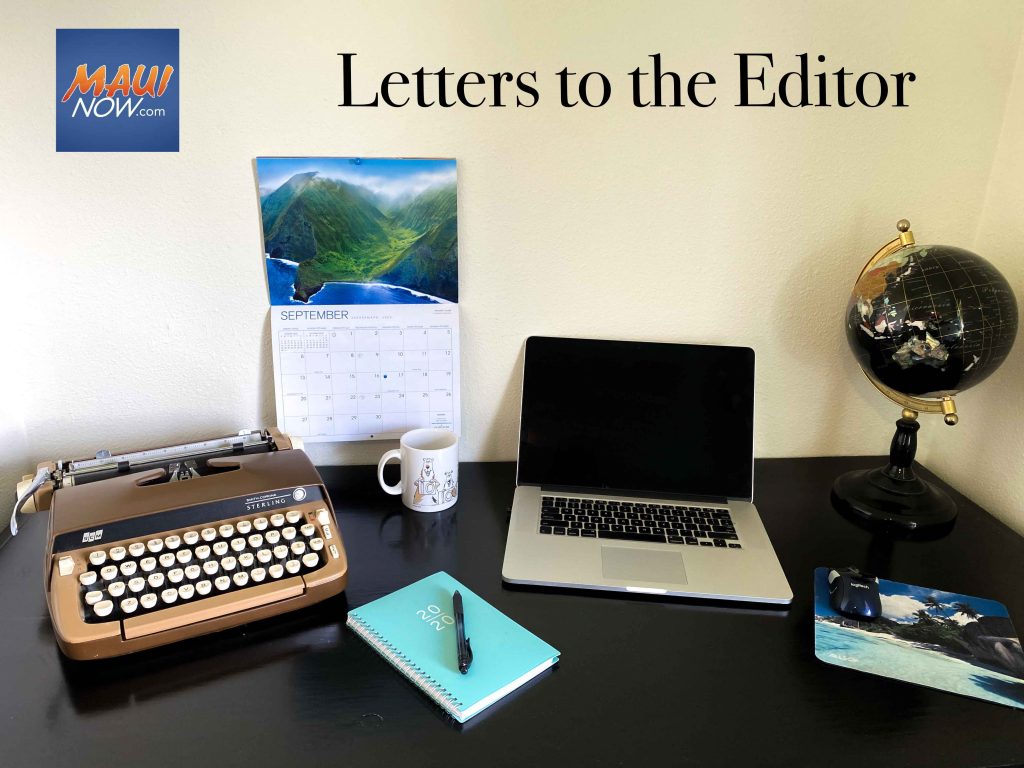 Concerned That Tourists Will Bring Coronavirus To Maui Despite Testing Program

Recently, 2900 tourists arrived on Maui and that number will now continue to rise daily. All of these people have already been tested before coming, but there is a  chance they could get the virus between their testing and boarding the plane 3 days later! And if just one of them has the virus, many on the plane might be infected as well.

Maui is now once again open for possibilities, but our population is being held hostage because a  second test was not required on landing — something the State refused to do because of logistics. Instead of waiting until they could do it, they opened the door and have now compromised  our being.

There has been a renewed run on rice, toilet paper, soap and essentials at Maui stores — a telling indication of how people feel. So while tourists can frolic about the beaches and help jump start the visitor industry, the citizens of Maui are now lab rats if you will, awaiting to see the consequences of this calculated risky experiment at a moment when the virus is spiking once again nationally.

I am NOT against balanced tourism or opening the economy. I am very frustrated with the government. The Hawaiʻi government, pressured by business, opened far far too early, and in doing so threatens the safety of the population by using economic scare tactics to convince us that we needed to open without a second test.

My fears and criticisms will be either verified and or disproved in a matter of a few weeks as the Island’s visitors multiply in the face of the holiday season. We either will see major spiking or not? The question is, how much pain and suffering are worth high hotel occupancy, how many lives lost, how many sick, and how much renewed disruption because the economics, management and timidity of the government about second testing stopped it from happening? — Vinnie Linares, Kula

Free Tests For Locals Should Be Available for Interisland Travel

I have been in quarantine for two weeks because I went to the mainland and three days before I was to be ending my quarantine the state allowed people to take a pretest to come to Hawaiʻi without quarantine. Before I came back to Maui, I pre-tested negative and 5 days after my arrival I post tested negative. I requested early quarantine cancellation, which was denied by the state.

I’m not really sure why I would have been such a threat after quarantining for two weeks and pre-testing and post testing negative. So now the state is open and a lot of people are not testing and they are supposedly quarantining, which I think a lot of us know they are not. During my two weeks I never got a phone call; I never got a visit. All I received was a text asking me if I been quarantining. When I said yes, it said that my submission was complete.

Now you can pretest to go interisland to see families but it costs $150 each person to test. What local family can afford $150 a test plus airfare to go interisland? Most of us are struggling to even purchase airfare at this time. I don’t really think the state is thinking all of this through. If there are tests that are free to do interisland travel, I think it would help the locals.

Just wondering if any of your readers agree or disagree with what’s happening with all of this quarantining and pretests and all the people coming into the state that are not testing. And I love the idea that after a visitor comes to Hawaiʻi they are to stop everything they’re doing and post test so they can avoid quarantine. Not sure that’s gonna happen. Aloha. — John Browning, Kula

I noticed a lot of vehicles on our roads with out-of-state license plates. I thought anyone shipping a car to Hawaiʻi had 30 days to go to the Department of Motor Vehicles to get Hawaiʻi plates, safety inspections and the required insurance.

Why is the Maui Police Department targeting locals with out-of-date safety inspections and registrations instead of someone who has never paid one dollar to Maui County to drive on our roads?

When I shipped my vehicle back home from college to Utah, due to COVID-19, I had my Insurance, safety inspection and registration in a week. I think MPD should pull over every out-of-state license plate they see and cite them to encourage the owners to contribute to our community and our roads. Conceivably, they could drive forever on Maui and never contribute a dime. Humbly. — Savannah Blietz – Haiku

Senators Mazie Hirono and Brian Schatz should support government funding for cultured-meat research. For readers who aren’t aware, cultured meat is grown from cells, without slaughtering animals. It will benefit non-human welfare, public health and the environment.

The benefit to non-human welfare should be obvious. We kill over a trillion aquatic and land animals for food every year. The amount of preventable suffering this represents boggles the mind. Cultured meat will help make this a thing of the past. One must imagine our ancestors will regard humanity’s current treatment of animals with horror and shame.

In terms of public health, slaughtered meat is pumped full of artificial growth hormones and unnecessary antibiotics, which this new protein doesn’t require. Further, the risk of zoonotic diseases making the jump to humans would be significantly reduced with the adoption of cultured meat, since animals are removed from the process.

Finally, this new protein costs a fraction of the greenhouse gases to produce than raising livestock does. It requires drastically less freshwater and land. And since cultured meat is made in a closed system, there’s no agricultural-waste runoff. We need government funding to help bring this revolutionary product to market. — Jon Hochschartner, Granby, CT