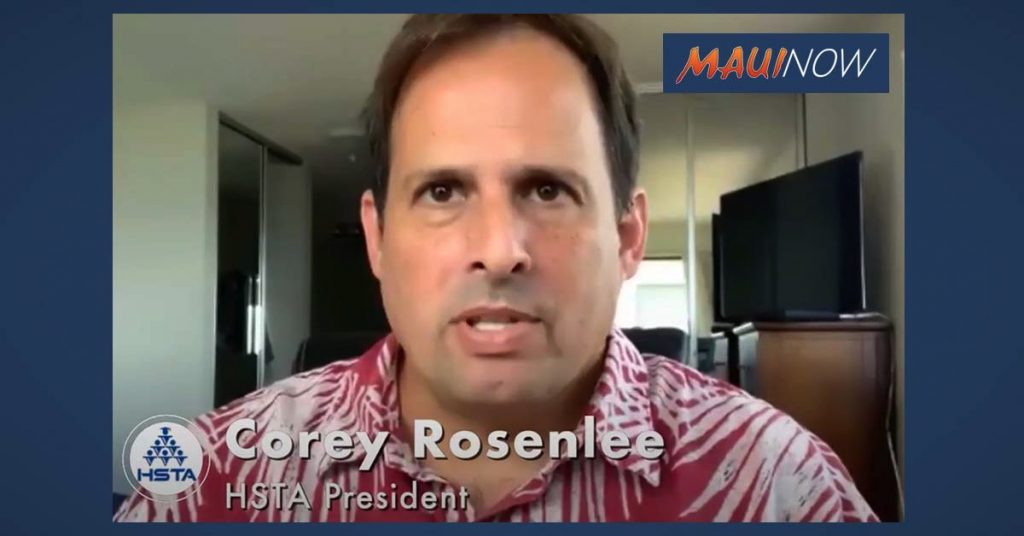 The complaint says the state does not have the authority to impose furloughs without bargaining, since HSTA has a contract in place until June 30, 2021.

HSTA President Corey Rosenlee said, “Collective bargaining is enshrined in Hawaiʻi’s constitution, and contracts cannot be dismissed when the governor considers them inconvenient. Otherwise, why have a contract? If these illegal furloughs are implemented, Gov. Ige would be the third governor in a row to cut teacher pay. Such a move would be bad for education, worsen Hawaiʻi’s teacher shortage crisis, and ultimately hurt our keiki.”

“We did want to inform the public employees and public servants as early as we could, because certainly we know that it would have an impact on their actions… The departments of education and the University of Hawaiʻi would have additional information about the numbers at UH and within the public schools that would be subject to furlough,” said Gov. Ige during the briefing last week.

Under the governor’s plan, state employees will be furloughed two days a month starting Jan. 1 of 2021, to balance the state budget.  The state is projecting a $1.4 billion budget shortfall in the general fund for each of the next four fiscal years. If the furlough is effective for one year, the state will save about $300 million, according to the governor.

The complaint states the following:

“The Employer’s refusal to bargain in good faith, its unilateral implementation of its furlough plan while negotiations are ongoing, its direct communication with HSTA’s members on the subject of negotiations and its threat of layoffs if furloughs are not agreed to, and its violation of the CBA (collective bargaining agreement), is evidence of Respondents’ willful, egregious, and blatant misconduct and actions which constitute a violation of HRS §89-13(a)(1)-(5), (7) and (8), including but not limited to interfering, restraining and coercing HSTA’s members from exercising their guaranteed rights under” Hawaii’s collective bargaining law and the union’s collective bargaining agreement.

“The Employer’s unlawful and inappropriate conduct has a chilling effect on HSTA’s members in the exercise of their union rights by creating fear and worry amongst HSTA’s members.”

The complaint alleges that neither Gov. David Ige nor Superintendent Christina Kishimoto communicated or discussed the final furlough implementation plan in advance with HSTA.

The HLRB is expected to schedule a hearing on this case during which it will hear arguments.