The women of two Maui halau were greeted with signs and chant upon their arrival at Kahului airport Sunday morning.Â  The hula dancers returned to Maui after a successful appearance at 46th Annual Merrie Monarch Festival in Hilo. 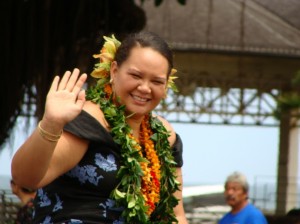 Maui’s own Cherissa Henoheanapuaikawaokele Kane became the first Maui dancer in 30 years to earn the title of Miss Aloha Hula, earning a total of 1,064 points, 26 more than her nearest competitor.Â  Kane was also awarded the $1,000 Office of Hawaiian Affairs Hawaiian Language Award for her chanting.

She joined her hula sisters from Halau Kealaokamaile, under the direction of Kumu Kealii Reichel in taking a debut fourth place finish in the auana or modern hula division for their interpretation of Lei Ho’oheno.Â  They were followed by fellow Maui halau Na Lei Kaumaka O Uka under the direction of sisters Napua Greig and Kahulu Maluo-Huber of Kula Maui, with just one point separating those in third, fourth and fifth place.

In the men’s division, five men from Maui’s Halau O Ka Hanu Lehua performed a proud tribute to the Valley Isle with a hula to Ku’u ‘Aina Ho’oheno under the direction of kumu Carlson Kamaka Kukona III. 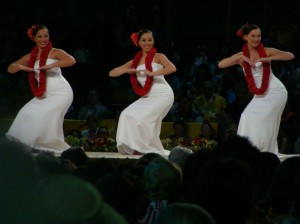 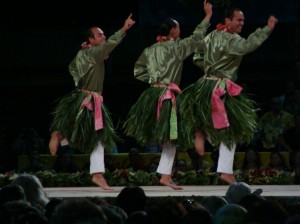 The men of Halau O Ka Hanu Lehua under the direction of Carson Kamaka Kukona III perform an auana hula to Ku'u 'Aina Ho'oheno in Day 3 of the Merrie Monarch Hula Festival in Hilo, Hawaii.Â (Photo by Wendy OSHER Â© 2009)