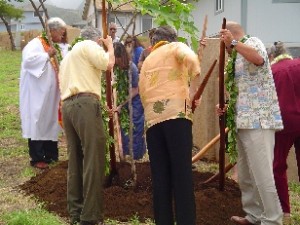 Kamehameha Schools today announced the appointment of Micah A. Kane as its newest trustee this afternoon (Friday, July 17, 2009).Â  The appointment was made by Hawaii Probate Judge Colleen Hirai.

Kane is a 1987 graduate of Kamehameha Schools and currently serves as the Director of the Department of Hawaiian Home Lands.Â  His appointment is for a five-year term, effective September 1, 2009.

Kane replaces Trustee Robert Kihune who began a decade of service with Kamehameha Schools and will serve the remainder of his term through August.

In response to the appointment, Governor Linda Lingle said, “I’m very happy that Micah has been selected…I have worked closely with Micah for the past 11 years, and have watched him develop into one of Hawaii’s finest and most respected leaders. Â He has the skills and experience, combined with the heart and compassion, to serve as a trustee of this valued organization that is of such great importance to Hawaiians and non-Hawaiians alike.”

“I am confident that Micah will do an outstanding job carrying out the will of Princess Bernice Pauahi Bishop in overseeing the governance of Kamehameha Schools, which is among the most important institutions for perpetuating Hawaiian culture for future generations while preparing Hawaiian students for the 21st century,” said Lingle.