â€œLAHAINA PLANTATION DAYSâ€ THEN AND NOW

The Lahaina Restoration Foundation is hosting a three-day event celebrating the town’s plantation heritage.Â  “Lahaina Plantation Days, Then and Now” begins Thursday July 30 at the old Pioneer Mill site near the historic smokestack on Lahainaluna Road.Â  The event will feature entertainment, food booths and exhibits. 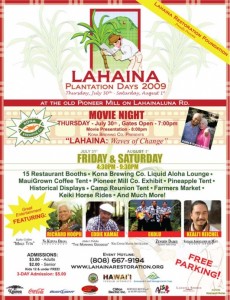 The event will feature entertainment by cultural groups and popular musicians, restaurant food booths, coffee garden, beer tent, a Kid’s Zone with nostalgic activities, historical displays and exhibits, a “Camp Reunion Tent” honoring those who lived and worked in the West Maui plantation camps, and a preview of the proposed Pu’ukoli’i Village project by Kaanapali Land Management Corp. which builds on West Maui’s past.

A special film presentation will be shown outdoors on a large screen on Thursday.Â  The 60-minute documentary directed by filmmakers Eddie and Myrna Kamae, “Lahaina: Waves of Change,” highlights Lahaina’s rich history as the first capital of the Hawaiian Kingdom and later the center of the sugar industry in West Maui.Â  Film gates will open at 7:00 pm with the feature film starting at 8:00 pm.

Historical displays, coffee tent, beer garden, mini laulau and chowfun booth will be open on July 30th.Â  Â Admission on all three nights of the event is $3, seniors are $2 and keiki 12 and under are free.Â  A special three day pass is available for $5.

The public is also invited to buy a brick as part of a fundraising campaign to restore the mill’s 225-foot high landmark smokestack in West Maui.

In 2008, Lahaina Restoration was granted a 20 year lease by Kaanapali Land Management Corp. to undertake the complete restoration of this smokestack and to build an interpretive display at its base.

The Pioneer Mill had a 139-year history on the Valley Isle.Â  The final demolition of the Pioneer Mill Company’s buildings came in 2006, however, the memories of these plantation days remain.

“This new Plantation Days event honors our West Maui’s roots,” said Theo Morrison, Lahaina Restoration Foundation executive director, “It’s an exciting opportunity for visitors and residents to learn about the people who labored in the mill, toiled in the fields, and raised their families in West Maui’s plantation camps. Their triumphs, sacrifices, courage and contributions made a significant and lasting impact on Maui.Â  It is their lives and this important era of history that this Lahaina Plantation Days event will celebrate.”