Central Maui Little League suffered a 7-4 loss to Glendale, Arizona, in its opening game of the Little League West Regionals in San Bernardino earlier today.Â  Central Maui returns to action on Sunday against Chula Vista, Calif.Â  The game will be aired live on Maui’s ESPN 550,Â  KMVI AM at 5 p.m. on Sunday, Agusut 9, 2009.

Pacific Radio Group is broadcasting the games featuring the Central East Maui All Stars at the Little League Western Regional Championships being held in California.Â  The coverage began on Friday on our ESPN 550 AM KMVI radio station. 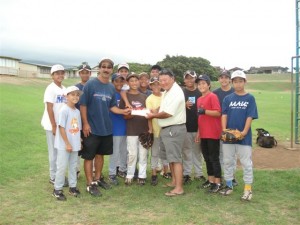 (Former Mayor Alan Arakawa presents a check to the Central East Maui Little League coach, Glenn Yonashiro on Wednesday. The team did some last minute fundraising prior to leaving for this week's tournament) Courtesy Photo.)

The Maui boys advanced to the tournament after winning the 2009 Major Little League State Tournament Championship on Oahu.Â  The regional tournament runs from August 7th to the 16th and features teams from California, Nevada, Arizona and Utah.Â  The winner of the tournament then advances to the Little League World Series in Williamsport, Pennsylvania August 21-30, 2009.

The play-by-play will be provided by Larry Burch, who has been covering the Western Regional since 1984.