Eleven recruits joined the ranks of the Maui Police Department, as members of the 71st recruit class graduated during a ceremony held at the Maui Beach Hotel in Kahului.

Class president Marvin Tevaga is among the list of recruits that begin their careers to protect and serve.

“If not us, then who,” said Tevaga.  “As we have gone through some intense training, these past nine months, these five words have become a mantra, a motivation each day, entuning my desire to becoming a police officer in the Maui Police Department,” Tevaga said.

“Nine months ago I thought I started a new career.  Today, I look at my 71st recruit class:  my sister, my brothers, and I realized that it wasn’t just the beginning of a career, It was a start of a journey,” said Tevaga.

Keynote speaker and SHOPO president Tenari Ma’afala gave advice to the new members saying the thing that separates police as first responders is the split second decision to take a life or save one. 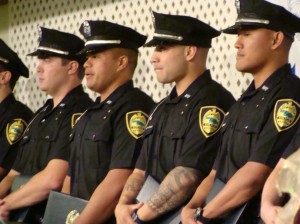 “Are you ready, are you willing and able to do it,” said Ma’afala.  “Yes you are.  Based on the training that you all just went through in recruit school, that’s where it’s at.  You get on the road. You forge your own style, you forge your own man and womanhood and stand fast, face fear.  When there is a firefight, or gun fight, we run to it, when people run away.  That’s what we do, we bleed blue,” said Ma’afala.

Five awards were issued to select recruits for excellence is various skill sets.

Earning the Outstanding Recruit Award was Miguel Munoz , a native of Maui who attended Maui High School and UH Manoa.  He is being assigned to the Wailuku Patrol District.

Members completed 9 months of recruit training and will now be assigned to the Field Training Officer Program for the next four months.

VIDEO: Maui Firefighter first in state to be honored with Firemark Award