There’s new hope for a critically endangered forest bird on Maui.Â  Results from a two week survey conducted in September suggest that the Maui Parrotbill numbers are showing signs of stability. 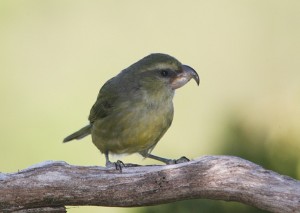 Teams from the Maui Forest Bird Recovery Project estimated there are about 20 parrotbills per square kilometer of forest, that’s more than double the density reported in a previous survey.Â  The count was taken in the Waikamoi Preserve in the forested uplands of East Maui between the Waikamoi Stream and the Ko’olau Gap.

The birds, once more widespread on Maui and also on Moloka’i, are now only found on Maui, and only within a range of 19 square miles on the high windward slopes of HaleakalÄ.

“I didn’t expect that there would be that many birds there,” said Dr. Dusti Becker, the project coordinator for the Maui Forest Bird Recovery Project who led the research team.

“To have an endangered bird maintain its population and perhaps even show signs of increasing is very encouraging and cause for celebration,” said Dr. Sam Gon, the Nature Conservancy’s senior scientist and cultural advisor.

Although the numbers are encouraging, scientists also caution that the information is limited to a two-week survey.

The Maui Parrotbill, is an insect-eating forest bird.Â  It is 5 to 6-inches long with olive green tops and yellow underbellies, and a distinctive yellow stripe over their eyes.

The U.S. Fish and Wildlife Service estimates that there are only around 500 individual birds.Â  More than a quarter of the known habitat for the parrotbills is within Waikamoi Preserve. Much of the rest is within the state’s Hanawi Natural Area Reserve, where parrotbills occur at a density of about 40 per square kilometer.

The Nature Conservancy has been actively managing the 5,230-acre Waikamoi Preserve since acquiring a permanent conservation easement to the property in 1983, from HaleakalÄ Ranch.

Since that time, the Conservancy has fenced out pigs, removed alien plants and increased native plants that forest birds and other species depend on. A recent vegetation survey in another portion of the preserve found a three-fold increase in native shrub cover over the past 15 years.

Scientists say it possible that removal of pigs and improvement of the understory vegetation growth-which parrotbills use for feeding habitat-has increased population size at Waikamoi.

“At Waikamoi, my sense is that it’s a growing population, fundamentally because of forest recovery,” Becker said.

(Posted by Wendy Osher; supporting information provided by The Nature Conservancy of Hawaii)