After a weekend visit to the island of Lanai, House Speaker Calvin Say is recommending that the reorganization of the Eligibility Processing Operations Division occur only on Oahu where access to services is not as limited, and not the neighbor islands.  The state Department of Human Services plans to lay off 228 workers and close 31 offices, including those providing services to welfare, Medquest and food stamp beneficiaries on Maui. 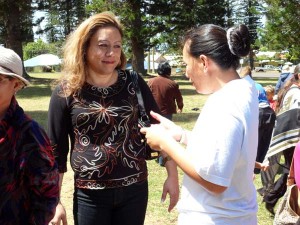 “It is not right to impose a new system without any consultation with the people who will be affected by it the most,” said Carroll.  “I want to thank the Lana`i residents who came to meet us on Saturday and spoke out about their concerns regarding the closure of the Lana`i office.  Together we have inspired a measure that could save our most vulnerable residents from losing the benefits they so desperately need,” she said.

The recommendation includes a suggested proviso in Senate Bill 2650, preventing EPOD reorganization from affecting neighbor island offices.  The present draft of the bill authorizes the governor to implement a pilot program in counties with a population exceeding 500,000.  According to Carroll, only Honolulu County currently meets the criteria. The State House of Representatives and the Senate are scheduled to vote on SB 2650 for third reading on Wednesday, April 14, 2010.

“Citizens on O`ahu always have the option of coming to the Capitol directly to discuss their concerns, but citizens in my district often feel they are isolated from the Legislature and from the decision-making process,” said Carroll.  “I’m happy that the House leadership, specifically Speaker Calvin Say  recognizes the importance of this issue and is willing to take the time out of their busy schedules to acknowledge Lana`i and hear its citizens’ concerns,” she said.

Among the chief reasons for the visit was to give House leaders the opportunity to see how the Department of Human Services runs on Lanai, more importantly the neighbor islands.  “There is a huge difference between Lana`i and O`ahu in terms of how DHS workers communicate with their clients,” said Carroll.  “On Lana`i, face-to-face contact is crucial.”

“Many of the residents don’t have internet access and there is only one public fax on the island,” Carroll said.  “It is very important to them that they know the person handling their paperwork—their lives, essentially.  About 58% of the population are of Filipino ancestry, many of whom came to Lana`i work on the plantations, so it is very important that a worker be present to explain exactly what is required,” she said.