Next Steps Discussed in Ahihi-Kinau Closure

Discussions continue on a recommendation to keep the Ahihi-Kinau Natural Area Reserve closed after current restrictions are set to expire on July 31, 2010.

DLNR began enforcing the two year closure on access to the majority of the reserve, including unofficial trails to Kalua o Lapa, Kalaeloa, and Mokuha on August 1, 2008. 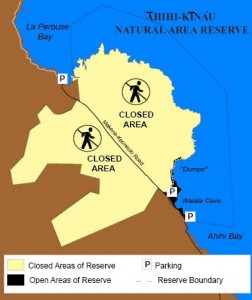 The restrictions were enacted to increase protection of cultural and natural resources, and reduce impacts by the growing number of visitors to the area.  The two-year restriction was considered a first step in immediately addressing concerns.

An advisory group for the reserve recently voted unanimously to request a continuance on existing restrictions. The Group decided that restrictions should continue at least until the draft management plan currently under production is completed and implemented.

Officials with the Department of Land and Natural Resources will give a short presentation, discuss updates related to the current closure, and answer questions related to the department’s actions on Wednesday, April 21, 2010 during an informational talk story meeting at 6:30 p.m. at the Lokelani Intermediate School cafeteria (1401 Liloa Drive) in Kihei.

The item goes before the Natural Area Reserves System Commission on May 5, 2010 and the Board of Land & Natural Resources in June.

Under the existing closure, access to northern portions of the reserve most used by the public have remained open during visiting hours. Some of these open areas include the Waiala Cove and the coastal area along ‘Ahihi Bay including the “Dumps” surf break.