The county has proposed the conversion of a half acre parcel along Front Street into a recreation area with picnic tables and landscaping.  The proposed replacement property is located north of Mala Warf and was acquired by the county three years ago in a settlement of a lawsuit.  The previous owner of the 1377 Front Street lot had planned to build a home there, but previously approved permits were retracted, resulting in the suit.  Since the incident, neighbors in the area have been keeping the lot maintained. 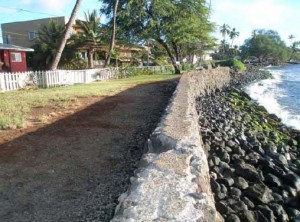 The planned development of the site into park land, is considered a replacement property and a mitigation measure as the county proposed to license the Youth Center at the Lahiana Recreation Center to the West Maui Boys and Girls Club.  Because the membership fees and age limits will restrict the use of the facility, the county was tasked with coming up with a replacement property of equivalent recreational and appraised value for public use.

The county Department of Parks and Recreation used federal grant funds from the Land and Water Conservation Fund Program in 1985, 2000, and 2002 to construct the Lahaina Recreation Center.  As a provision of the grant, 28 acres of the property was placed under Section 6(f) protection, which requires that the property be retained in public use for outdoor recreation.

The vacant replacement property includes 680 linear feet of shoreline a few blocks north of historic Lahaina Town.  It is currently zoned as R-1 Residential, however the Community Plan designation is a combination of Open Space and Single Family.

Plans call for the improvements to start in the county’s 2011 Fiscal Year, and take no longer than a year to complete.

Because no major facilities or park development is being proposed, public involvement for the design phase is not envisioned. A 30 day public comment period on the county’s Draft Environment Assessment began on Friday, April 23, 2010.

Tavares on TAT: "We can see the light at the end of the tunnel"