Water to six East Maui streams will be restored at varying levels, under a decision issued by the state Commission on Water Resource Management tonight (Tuesday, May 25, 2010). The commission also voted to keep instream flow standards at status quo levels at the remaining 13 East Maui streams under consideration. The decision was quickly met with opposition by the Native Hawaiian Legal Corp., which asked for protective order for a contested case hearing before the meeting adjourned at 9:15 p.m. 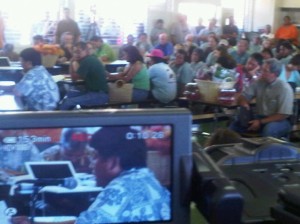 After eight hours that included testimony, presentations and deliberations, the state Commission on Water Resource Management decided to restore a total of 9.71 mgd to 6 out of 19 streams under consideration. Photo by Wendy Osher.

The Native Hawaiian Legal Corporation has 10 days to file the request in writing. The Attorney General’s office with then advise the commission on how to proceed with a decision to be made on the matter in a future commission meeting.

Of the six streams granted water restoration, two will be restored based on an annual calculation with Makapipi stream to get 0.6 million gallons per day (mgd) restored, and Hanawi stream to get 0.06 mgd restored. Commission Chair Laura Thielen said the restoration, “is a nominal amount to create a wetted pathway for connectivity.”

The Waikamoi stream, which serves the Upcountry area, will follow the smaller DAR figures with no restoration in the dry season, and 1.68 mgd restored during the wet season. Earlier in the evening, Maui Mayor Charmaine Tavares advised commissioners against restrictive instream flow standards at Waikamoi. She said the severity of the impact would affect nearly 10,000 Upcountry water users including homes, small businesses, farmers, ranchers, 10 schools, 11 churches and three medical care facilities.

The commission also issued a series of recommendations to the County of Maui and to HC&S for monitoring, evaluation and reporting. Maui County will be tasked with repairing infrastructure in an effort to reduce waste. HC&S will have to update their documentation of any system loss from reservoirs, and report on the end use of water annually to the commission. The initial report must be filed with the commission no later than September of 2010.

“I want to thank the Maui Community for being so diligent and respectful through these entire proceedings,” said Thielen. I know it’s been a very emotional issue for the people here and it’s been many years in coming and you folks deserve a lot of credit for the community participation and involvement along the way,” she said.

Based on the decision, total restoration of water for the 19 streams under consideration is 9.71 mgd.

(Video and additional information to be posted here at MauiNOW.com on Wednesday morning, May 26, 2010)