The Comedy Hui, an ensemble of established theater veterans, launches their first show in a monthly series of real-time improvisational comedy in McCoy Studio Theater at the MACC on Friday, June 4, 2010 at 7 pm. 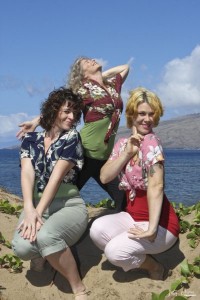 The Comedy Hui strives to deliver wacky, character-based, clean comedy that is fun for the whole family.  Performances are constructed by audience suggestion and similar to the TV show, “Whose Line Is It Anyway?”  The cast creates scenes through a series of fast-paced games and improvised musical numbers.  Each show is different because each audience is unique, helping to co-create the show with the actors on stage.

Laugh out loud fun and get your giggles on at the MACC one Friday a month over the summer:  June 4, July 16 and August 20.  On June 4, a portion of the proceeds will benefit Big Brothers and Big Sisters of Maui. Tickets are selling for $20 adults and $12 children aged 12 and under.  To order, call the Box Office at 242-SHOW (7469) or go online to MauiArts.org.