Maui Mayor Charmaine Tavares received the endorsement of the State of Hawaii Organization of Police Officers (SHOPO) on Friday, July 23, 2010. SHOPO has 2,800 members statewide with nearly 400 in Maui County. 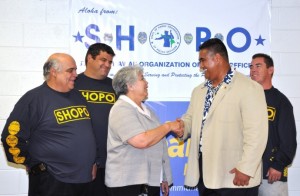 “We have seen Mayor Tavares take difficult and complex situations and find agreeable solutions between people… What makes her stand out is how genuine she is,” said Ma’afala.