Introduction: My name is Jonah Keeaumoku Kapu.  I live in Kauaula Valley in Lahaina on lands that are kuleana lands, that were passed down from generations from the crown all the way to today.  One of the key issues–because my whole life has a lot to do with that perspective of being a part of a place from generation to generation–my whole spin on this campaign is to have people 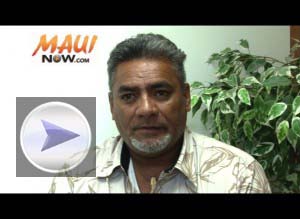 Funding for fire helicopter/air ambulance: West Maui has been the site of several large fires in recent years.  If elected to the council, would you support full funding of the Air One helicopter service, or given the tough financial climate, advise the department to explore other options for emergency funding?  Answer: I would definitely figure out other opportunities as well–not only support the funding for the helicopter services, but also everything that has to do with emergency purposes because the West side is one of those key elements.  They’ve been talking about an acute care facility on the West side for a long time which sort of intervenes in the state jurisdiction.  So, as for the county and its constituents and what they are responsible for under the public trust doctrine, we need to make that a priority to make sure that our fire departments and emergency crews get whatever they need.  Basically, when you start talking about budget, you start talking about dynamics and politics.  I would support it 100%–whatever needs to be done to make sure that we have our emergency teams out there for the benefit of the public constituents.

2nd Hospital: Do you think the establishment of a second critical care facility on Maui would help serve outlying communities, or deplete resources from the current Maui Memorial Medical Center?  Answer: That’s kind of hard, because I think it would help out the West side.  In fact, any suburban area that doesn’t have an acute facility (would benefit).  Because when things happen, we always talk about anytime there’s a major accident on the highway, we don’t have the facilities to accommodate on Maui alone, so we start airlifting them to Oahu.  It’s definitely a need, and whether or not it’s going to take away the revenues, or how it’s going to deplete from people utilizing the main hospital here–I think there’s a way to create a discussion on how we can merge these entities together to try to see if we can manage that island concept to bring everybody together as one.  Not an acute care facility that is only based upon certain people, and restrictive to certain areas.  I think it should be open to the majority–to everybody.

Small business empowerment: Given the current economic situation, what would you do to stimulate the economy and help small businesses thrive. Answer: Stimulate the economy–you know we talk about–every time the county sits down to development and tries to look at the preliminary plans on how the development is going to be suitable, the county’s responsibility to look at the public–It’s always kind of an odd situation.  For me to understand-why is the county always looking for open space.  The developers, normally they create these park settings of 4-6 acres.  They say, we’ll give you this as a trade-off.  I think those areas should be more of a green zone area to allow our residents that can’t be sustainable within the residence s that they live in because they live by stringent policy from the neighborhood boards or private homeowner associations.  That may be an opportunity to allow the public constituents to have a green place to go so that they can be sustainable themselves, and be backed by the county.  The county has some key elements that unhulled can become a reality.  What I see how Maui is–we live in a veil.  And the veil is that they feel that the county has the responsibility to protect their interests.  That’s fine, but as a grass roots community need to make some kind of effort to make sure that we hold them up to the conditions pertaining to what’s right for us and our family generations tomorrow.

Mokuula/Cultural advocacy vs park space:What are your thoughts on the restoration of Mokuula?  After so many years of starts and stops, is it worth the time and funding or is valuable park space being held up in the process?  Answer:  It’s definitely worth the time and effort.  I’ve been affiliated with the friends of Moku’ula from the time that (from about 1999 or 2000) for about three years.  I was a consultant to help Akoni Akana deal with the logistics in the county as well as the state.  And we did programs all over the state to share its importance as to why Moku’ula needed to return.  We live in an island that has a specific character behind it, and the character basically is the kingdom or the crown.  When you’re looking at the district where it is, it’s historic district 1.  So when you’re talking historic district 1, they built a baseball field over there.  They throughout the years found that what had happened over there was basically, to me I look at it as genocide.  It’s a strong educational component to allow our elders and our younger generation to tap into something that becomes the character and identity of that place.  And many people all over the state of Hawaii can relate to those kinds of things; that it would broaden even the majority of the merchants that work in the town if this project were successful.  Today we have a lot of hotels, a lot of storefront property that use that as a catalyst to bringing in tourism, but it’s not built yet.  The only Native Hawaiian non-profit organization that has suffered over 20 years on granting, on funding on the grants program–all these kinds of things–that if we were to concentrate those efforts, it would be educational-based, it would be a cultural vehicle to have the merchants consider that these things are of value–which would boost the economy in their area as well.  But while supporting what is of the past and why that place is significant and designated under Historic District 1.

Closing thoughts:  I’m a really grass roots kind of guy.  I had my campaign fundraiser.  I fed everybody.  My sons donated five pigs; they donated a cow.  We just fed everyone Hawaiian food.  Like I said, I’m grass roots.  How to get in touch with me: you can either go on facebook, punch in Keeaumoku Kapu, press search, and there’s a whole list of things pertaining to what I’ve been involved in in the past.  I would just like to send the message out there to not be fooled by I guess the promises that were made.  That we really need to consider looking at how these islands can be sustainable by the community’s involvement in a process that we have been doing since 2007, and that’s the Aha Moku Act 212.  And the reality is, is we need to find ways of not choosing the victor or the messiah that will represent us.  We should step out there as public constituents to really voice our opinions as one if we really want to make a change for the betterment of tomorrow, based upon this recession that we’ve been in–I don’t believe that there is a recession.  I believe that there are corporate entities that are claiming that there is a recession.  And when you vote, vote with your heart, not from the promise that candidates make.  I’m not throwing an endorsement out there saying I am the guy, but as I look how politics is going right now, and the amount of people that are running, for me myself, I say I would vote for nobody because we’re going in the wrong direction.

Maui Mayoral candidate Kahoohalahala among those endorsed by Sierra Club