Rules proposed for parrotfish, goatfish and jacks in Maui and Lanai waters

The state will discuss possible regulations for certain marine fish in Maui and Lanai waters during a meeting on Wednesday, August 25, 2010 beginning at 6 p.m. at the Maui Waena Intermediate School cafeteria.  Aquatic resource officials will discuss possible regulations of certain marine fish species including parrotfish, goatfish and jacks, and discuss scientific justifications for the proposed rules.  Anyone interested in these nearshore marine resources is encouraged to attend.

Aquatic resources staff will present the department’s regulated species rule proposals for the islands of Maui and Lana‘i.  Along with the proposed rules, staff will explain the rule making process with suggestions for how the public can get involved.

“Last year we held two previous rounds of meetings to present information on these fishes,” said Laura H. Thielen, DLNR chairperson.  “We’ve taken all of these comments and concerns, and developed a set of draft rules that would support the conservation of our marine fishery resources, while balancing the needs of recreational, subsistence and commercial fishers,” she said.

The Division has posted on its website several reports on the outcomes of previous public meetings.  Interested parties may find these useful for the upcoming meetings. 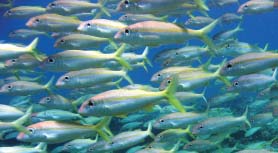