Introduction:  Aloha, I’m Elle Cochran, running for the County of Maui council seat for the West Maui district.  I’m new to this.  This is my first time running, but I have that passion, energy and drive, the willingness and openness to learn the issues, listen to the people in the community, and really truly be the representative of the voice of our people countywide–not just my West Maui district.  It’s a large area to cover, but I’m doing the best that I can trying to be everywhere and I think that’s what I hope to bring 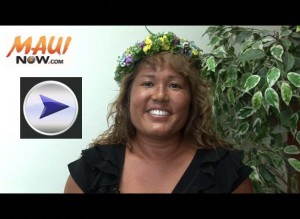 to this council–is having the open door policy, but also having the open heart, open mind and willing to listen to get all broad points of view and perspectives of whatever concerns and issues are in each individual town, community, what-have-you out there.  And with that, that’s what I hope to bring to the council.

Funding for fire helicopter/air ambulance:  West Maui has been the site of several large fires in recent years.  If elected to the council, would you support full funding of the Air One helicopter service, or given the tough financial climate, advise the department to explore other options for emergency funding?  Answer:  Definitely.  We’ve had more than just a couple fire incidents lately.  It’s almost like every day–there’s several per day even.  Kudos to the firefighters and everyone involved to help keep our community safe and making sure that traffic keeps flowing and what-have-you.  But yes, Air Ambulance, I believe is very important.  I was personally in a really bad accident, and at that point 350 feet down a cliff in Kahakuloa.  I may have needed that air ambulance.  I know of a family in particular, they’re visitors whose son–if it wasn’t for the air ambulance they would not have survived that.  So, even if it’s just one life that we save, that’s one life that is worth it in my opinion, for the millions of dollars that we need to put towards it.  And yes, the bottom line is with every issue and concern we have, I believe it’s money.  Where is the monies coming from?  Do we have the budget for it?  And of course, we need to look at research every different angle where that can come from.  There’s $20 million tied up in the real property tax appeals.  There’s many examples and we just need to have the political will and power to get in there, research it, perhaps put more staff into it to weed through the process of how we can make it happen.

2nd Hospital: Do you think the establishment of a second critical care facility on Maui would help serve outlying communities, or deplete resources from the current Maui Memorial Medical Center?  Answer: I definitely, whole-heartedly support a second hospital in West Maui.  We talked about traffic, fires, closures of this highway really prevents people from getting to and from.  If something happens, God forbid, that somebody due to the distance of trying to get them from West Maui into Central to the hospital here–It’s a matter of life or death.  I would hate to look into the statistics of the cases that if they would have had more immediate treatment, would they have survived?  I bet you there’s some numbers that could be had there.  My Mom is elderly, and if anything happened to her in the middle of the night or what-have-you, I would want her to get to some help quickly.  To drive from Lahaina over to (Central) Maui, really isn’t quick enough in my eyes.  But that just is one simple example with my own personal family.  So yes, I support it.

Small business empowerment: Given the current economic situation, what would you do to stimulate the economy and help small businesses thrive. Answer: I am personally a small business owner of a surf shop.  Thankfully we found a perfect location.  Location, location, location is true.  Also, we found a niche in our community that is needed.  We do rentals of surf boards and rentals of snorkel gear.  The tourism industry of course feeds that.  I would look into–The TVR/B&B issue is very very controversial, but I’m completely for hoping to revamp that and make sure it’s conducive for people who are following guidelines, rules, regulations, what-have-you, and not having a negative impact on their immediate surroundings.  Then yes, I believe it’s a case by case basis though.  I feel that at this point, we cannot put all of our eggs in one basket with tourism, agriculture, or development per se, but to branch out.  People possibly need to re-train, cross-train, learn new skills, what-have-you, but I think that there is a niche.  All of us here have a certain gift and we all need to find that gift deep within ourselves and turn it around into a money making event, or somehow educational, awareness to someone else.  All of that combined–because we’re in this together–we need to make sure that we are helping one another, and to help solve this economic downturn that we are in.  That’s just my take.  Yes, if it’s a matter of helping financially, with people to upstart their business, then by all means, we have ways in the county to do that–and just to educate people in the community that it’s there.

Mokuula/Cultural advocacy vs park space:What are your thoughts on the restoration of Mokuula?  After so many years of starts and stops, is it worth the time and funding or is valuable park space being held up in the process?  Answer:  I think Mokuula is is a very, very special, sacred place.  I have been down there to help clean up the area, malama.  Yes, it needs to be restored, it needs to be revived, it needs to be brought back.  It was the capitol–the Royal Capitol–of Hawaii. It’s a very, very special place.  It, at the time, I think filling it in due to the mosquito factor, turning it into a park–was at the time they needed to do that.  But right now, we need get back, restore the historical and sacredness of that area.  It doesn’t just encompass just Mokuula area, but it branches out over the walls that are there into Waiola Church.  It’s a big undertaking.  I 100% support it and they’re coming up with some wonderful findings and I think it’s extremely exciting to see this be uncovered day by day.  I do support it.  And yes, we are lacking in open space and public parks.  I believe West Maui is still in a deficit of 322 acres or so, and that is due to the fact that your developers have paid monetarily in exchange for the actual land space for our parks.  Being born and raised here, it’s just growing and growing population wise, so our little parks that have been here since I was born are being overcrowded.  There’s not enough space for recreational users and I hope to find people who would be nice and willing enough to actually give up the land area to create park and open space for our growing population and families to enjoy.

Closing thoughts: In closing, I’d just like to say that I appreciate all of you out there–the viewers, the voters–taking the time to really want to research who you truly want to be your representative and that’s why I’m out there to listen, to learn, to hear really what your community needs.  I believe this election is very important–not only that I’m in it–but also because it’s a (dawning) of a new era, it’s a (dawning) of a new day and I am that fresh, new voice–energetic, highly motivated, highly determined to pursue regardless of the outcome.  Because being of service to the community and the people is my way of life.  This isn’t something that I’m just doing for now because I’m running a campaign, because I’m looking for supporters and votes.  I’m doing it because this is what I do.  This is why I wake up in the morning.  This is what I eat, live and breathe.  And I enjoy it.  I will never do anything that I don’t enjoy.  I think the bottom line why I enjoy it is because I’m learning.  I’m learning so much.  I’m building very meaningful relationships in this community, which I never would have had the opportunity to–and with that it is already rewarding.  I would just like to say I will be here, willingness to hear, being accessible, and bringing government to a more sensible level.  I would love to have you give me that opportunity.  You can learn more about me at http://www.electelle.com/.  Mahalo.