Introduction:  Aloha, I’m Harold “Hap” Miller.  I’ve lived here on Maui almost 40 years.  I originally lived in Lahaina and got involved with real estate over there.  I got involved in sales, property management and development.  In 1979, I had a listing to sell condominiums on Front Street in Lahaina residential–those were affordable condominiums (one-bedroom condominiums) and we did very well.  We sold them out before we even broke ground, so it was good.  Continuing on, I moved down to Kihei in about 1987.  I bought a house.  I had success in investing in properties and did very well.  The county built some housing down there 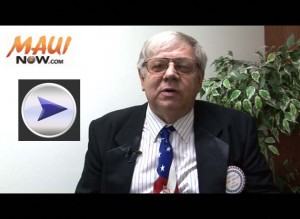 also, and these were affordable homes.  But my feeling is that the last three administrations haven’t built affordable homes for the people; and they have passed it on to developers.  Right now we have a developer–his name is Sterling Kim–and he’s in foreclosure.  The property has 200 acres in Happy Valley–so that’s sad that they force developers.  Then, once they get in trouble, he’s asked for bonds and they won’t give him the bonds.  So it’s just… I want to get the county back into building affordable housing and they can.  The land is available.  There’s lots of unemployed construction workers that need to work and need to get back working.   It will help the economy.  And we want to get these things going.  Also, I want to help the people, small business people that are struggling also.

Development:  What are your thoughts on smart growth and what will you do to prevent urban sprawl?  Answer: In Olowalu, there’s a big development going in there that is in the early stages of planning.  That’s in a good location out of Lahaina town, but close enough to the town where the people can drive easily to town or come to this side.  So that’s a good development.  It needs to be watched very carefully, making sure that infrastructure is taken care of.  The plans are to relocate the highway about half way up the mountain there.  So we’ll have a nice four lane highway going through the Olowalu area.  They’ve got to put in their own sewage treatment plant.  There’s more.  There’s the old Pioneer Mill land that was bought a number of years ago.  If it’s well developed, and can be built in an affordable range that people can actually afford these homes, maybe even starter homes type-of things and small lots would be alright.  We’ll work on getting these to the market.  But I mean, the county has to really take a strong stand on affordable housing.  They’ve been passing the buck to the developers–and like Sterling Kim, and other developers–have been forced to give 50% affordable housing.  It’s not working for them.

Permitting:  What are your thoughts on the county’s permitting process for B&Bs?  Should the approval for B&B’s rest in the hands of council members or the mayor’s appointed planning director?  Answer: I think it should be put in the County Council Members’–we elect these people.  They work for us.  There’s nine of them that will make a fair decision on Bed and Breakfasts.  As long as they’re up to code, and not interfering with the neighbors and in a good area that’s needed for these Bed and Breakfast properties, I think we can look at the County Council, our elected officials–give us the green light on doing this type of permitting which is been kind of stalled for quite a long time.  But now it seems to be back on track.

Fireworks Ban: Are you in support of or against it? Answer:  Actually, the aerial fireworks is very dangerous.  We’ve had a number up in Napili.  I know there were fireworks that came down on the roof of a house over there–actually it was a condominium.  It had a lot of damage.  It’s kind of scary when it comes New Years Eve or Fourth of July.  It’s a lot of pollution, but we have to restrict it to very small type of fireworks and not–we have to outlaw. There is problems with these people shooting off.  You can see the fireworks shot off where I live.  I don’t need to go to the beach, I can just look out my window and there’s fireworks all over the subdivision.  But I’m afraid that it’s a very dry season and people know what the fire hazard is.  These fireworks are very dangerous and luckily we haven’t lost any homes.  We’ve been very close to losing homes.  I’m against (?) fireworks which we have right now.  I want to see a safer –I want the safety of the island for the people here.

Transient accommodations tax:  If elected to serve, what would you do to ensure that Maui keeps its share of the Transient Accommodations Tax?  Answer:  I will do everything in my power to do that.  That was the original agreement.  Unfortunately, the county has made agreements, and we haven’t been able to enforce these.  The state comes along and decides they need it, although this past session they threatened to take it away.  It’s money that is earned over here and we need it.  I just drive down the road and our roads are in terrible shape.  I can’t believe the highways.  I mean the road going through Happy Valley is full of pot holes.  I can’t even believe it.  Then you continue on and it’s worse.  I don’t know why they’re taking money out of–the gasoline tax–they charge us extra–like five cents a gallon for the county tax, and the state takes tax out.  We need good roads as far as our cars are concerned are going to take the abuse.  It’s unbelievable.  I got on the road and people are driving half way off the road because the ruts in the road are so bad.  But anyway, we need that.  I mean it has to be done.  I won’t question that.  We have to get the monies together from someplace.

Water:  What are your plans to improve waste water treatment on Maui and your thoughts about injection wells?   Answer: Ok. Injection wells–I was involved almost 20 years ago–we were going to put in a private treatment plant in Kihei, because the Kihei plant was just over capacity–it just wasn’t there.  And we were going to treat the water; we weren’t going to inject the water. We were going to use it for growing palm trees.  It seemed like the demand for that nursery type of plant–we could actually use–and watering the plants would grow good.  We had about 100 acres we got leased from Haeleakala Ranch.  We had it all planned, but the economy went south and we never did build the plant.  That water going to the ground is just a total waste and we can and should reclaim it–not dump it in injection wells.

Closing thoughts: I have a website–it’s a small website that has a few things about me.  It’s hapmiller.com.  I’m working for the people, I’m going to be your public servant.  I have, and you can check the website on campaign spending, and check the other candidates and see where they’re getting their funds from.  I haven’t accepted any contributions from anybody.  Nobody owns me.  Like they say, we have the best politicians money can buy, and unfortunately, we look at the other candidates and we see where their money is coming from.  You know when something needs to be done, those people are going to be taken care of.  I’ve been here almost 40 years.  I’ve seen the changes.  We still live on a good island, but we need to maintain this here.  We have the largest number of people that return as visitors and as long as we keep our island as beautiful and unspoiled as we can, these people will come back.  We have to take care of the people here.  Again, there was an issue about our windmills, and we should take a part of the profit that they’re making.  I haven’t seen my electric bill go down a bit–a penny–since we’ve had those windmills.  So, somebody’s making money off of those windmills.  And if they want to build some more, we’ll let them build more, but they have to sign a contract–we’ll take a piece of their profit.  We’ll put it into our people here.  Thank you very much and I appreciate this time and look forward to you voting for me.  And I’ll be here anytime, my name’s in the phone book: Harold Hap Miller.  So you can call me anytime.  I’m open to listen to anybody.  Thank you.