Maui County Council Member Sol Kahoohalahala has announced his backing of former Mayor Alan Arakawa in his run for the county’s top job.  Kahooholahala who came in fifth in the mayoral primary, is the second of Arakawa’s opponents from the primary to announce his support—the other was Randy Piltz who placed third. 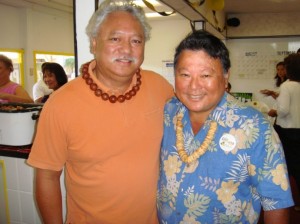 Kahoohalahala said he is believes Arakawa will work hard to revitalize and create a more competitive economy.  He said Arakawa would, “…provide tangible solutions for a sustainable Maui Nui that meets our needs today and for the generations yet unborn.”

Arakawa said he was humbled by the support saying.  He said, “It’s time for us to stand together to revitalize our local economy. As a community, we will find a solution, and I very much look forward to doing so with the business and nonprofit organizations, as well as community leaders such as Sol,” Arakawa said.

Arakawa faces incumbent mayor Charmaine Tavares in the November 2nd General Election.  Tavares came in first in the primary election, earning 7,307 votes, or 25.4 percent of the vote compared to Arakawa’s 7,039 votes and 24.4 percent.

UHMC aims for student success with grant for Native Hawaiians