VIDEO: LAHAINA ROYAL HO’IKE: From the Keiki to Ka’iulani and the Crown

A celebration marking the 135th Birthday of Crown Princess Ka’iulani took place this Saturday, October 16, 2010 at the historic Waiola Church and the nearby sacred grounds of Moku’ula in Lahaina, Maui.  The event entitled “Lahaina Royal Ho’ike: From the Keiki to Ka’iulani and the Crown” included a full day of festivities, Hawaiian entertainment, cultural and historic specialists, a silent auction, food and games. 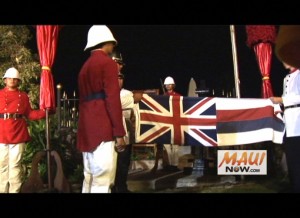 The Royal Hawaiian Guard performs the Oli Ka Hae. It hasn't been performed by a royal unit since 1893. The protocol was part of the 135th birthday celebration of Princess Ka'iulani that took place 10/16/10 at Waiola Church on Maui. Also honored was Queen Keopuolani whose tomb is located on the grounds of Waiola in Lahaina, Maui. Photo by Wendy Osher.

A few of the musicians who will be at Ho’ike are:  Uncle Richard Ho’opi’i, The Akima Ohana, Hiki No, The Kahaiali’i Ohana, The Kruger Ohana, the Tava Nui Drummers as well as Celtic musicians and a Scottish bagpiper, Hamish Burgess, Scot of the Year for Hawaii. (honoring Princess Ka’iulani’s dual heritage), to name a few.

For the first time in over a century, family descendants of Princess Ka’iulani will take part in official protocol that includes an escort by the Royal Order of Kamehameha, The Hawaiian Royal Order of Guards and The Royal Hawaiian Guard.  The ceremony includes the offering and acceptance of ho’okupu for Ka’iulani.

There will also be items from the Maui Historical Society, the Bailey House Museum, and some never-before-seen photographs relating to the life of Princess Ka’iulani Cleghorn.  The photos are on loan from The Ka’iulani Project, which has been working with Bishop Museum and Cleghorn family members for the past several years.

The Protocol ceremony is part of the “Lu’au o Ka’iulani” by The Ka’iulani Project. Richard Ho’opi’i, one of Hawai’i’s beloved singers will entertain during the Hawaiian feast prepared by the Royal Order of Kamehameha. Then the story of HRH Crown Princess Ka’iulani’s grace and determination will be told in a staged presentation of selected scenes from the original script “Ka’iulani, The Island Rose”. Halau ‘O Keaunui ‘O Maui, Ehulani Kane, Wilmont Kamaunu Kahaiali’i, Jennifer Fahrni and The Royal Hawaiian Guard, are among those who will be performing.

Mauians will have the opportunity to tour the sacred grounds of Moku’ula, where Maui College archaeologists are uncovering the spring-fed waters of Loko o Mokuhinia.  Moku’ula was once home to high chiefs from the 16th to 19th centuries, and served as a political and spiritual capital for the Hawaiian Kingdom.

About Waiola Church: Waiola Church, which was established in the early 1800’s during the reign of King Kamehameha the Great was instrumental in the introduction and growth of the Christian religion on the island of Maui. Queen Keōpūolani, wife of Kamehameha the Great, was the most powerful ali’i of the islands in her time, and had great influence on the people. She and Kamehameha had twelve kids together, two growing up to become Kamehameha II and III.

Keōpūolani was granted her request to be buried in a royal tomb, and still lays at Waiola Cemetary with her daughter, Princess Nāhiʻenaʻena. Also buried there, is King Kaumualii, last King of Kaua‘i who signed power over to Kamehameha the Great, thus creating the Kingdom of Hawaii 200 years ago. After Lahaina became the Capital of Hawai’i and the rulers spent time on Maui, Waiola Church was established and remains the perfect spot to celebrate Lahaina’s Royal Past.

***** If you enjoyed this story, you may also find our post on TARO FARMING interesting too. 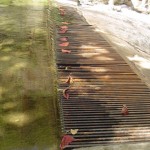