Many knowledgeable locals fans have been saying that this year’s Molokai High girls volleyball team is the best in MIL history.

The Lady Farmers validated that opinion in impressive fashion on Saturday by capturing the state girls’ Division-II volleyball title — a first for an MIL team.

With many of the same ladies playing a key role, Molokai won a state basketball title two winters ago.

Vaivai had 18 kills in the final and was named the tournament’s outstanding player. She was joined on the all-tournamentBac team by sister Farmers Kailana Ritte-Camara, Kalei Adolpho and Kawena Puhi.

The outcome of the D-I tourney was more familiar: An all-IHL final, with Kamehameha-Oahu celebrating a sixth straight title and 17th overall.

Both teams are regarded as among the best in the country, so fans at the King Kekaulike gym were treated to some high-quality volleyball.

Things didn’t go as well for the MIL’s three other qualifiers. D-I Kamehameha-Maui and King Kekaulike, and D-II Seabury Hall all were two-and-done. 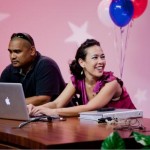