The Argument for Farm-to-Table 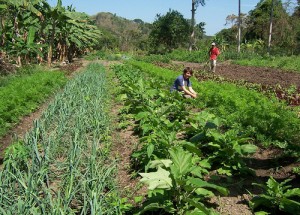 This week we’re going to focus on trends in Hawaiian agriculture and specifically, sustainable food.  Hawaiians have a long and mutually beneficial relationship with the land, so it’s no surprise that movements such as “farm-to-table” and organic farming have taken off on this collection of Pacific isles.

Sustainable agriculture is a Hawaiian concept older than the Dole plantation, but farm-to-table is a more recent phenomenon.

Farm-to-Table is the philosophy that in order to get the freshest and healthiest ingredients for their patrons, restaurants should only prepare locally grown produce that was preferably picked that day.  It marries health conscious eating with environmentally conscious farming to produce a culinary movement that has grown increasingly popular in the last decade.

The purported benefits to eating at Farm-to-Table restaurants are fivefold: the food is local, seasonal, more nutritious, it is environmentally and economically friendly, and there is the irreplaceable human equation.

The definition of “eating locally” is not black and white but the commonly understood rule of thumb is that humans should only eat food that comes from within a 100-mile radius of their home.  The reasoning is that the food is fresher and healthier because it did not have to travel long distances or be sprayed with preservatives.  It is also easier on the environment because fewer fossil fuels were burned to get it to your table.  Farm-to-Table restaurants take this local mindset to heart and have a strong connection to the community in which they are a part.  They partner with local farms and producers to make sure they can always bring the freshest ingredients to their patrons.

In order to eat locally, you have to eat what’s in season.  This, according to health professionals, is a very good thing.  Our bodies need different concentrations of nutrients at different times of the year, and magically, the produce that is at its peak in each season, has everything we need.  The other argument for seasonal eating, is that produce tastes best (and is healthiest for you) if it is picked when ripe, because that’s when the fruit is fully developed.  Due to its tropical climate, it’s understandable why Hawaii is a popular local for farm-to-table restaurants.

As was mentioned above, fruit that is picked ripe at the height of its season has a higher concentration of nutrients than that which is picked green.  It is also healthier for our bodies to eat produce that’s seasonal, because then we are getting the right vitamins and minerals to help fight off illness.

The Environment and the Economy

Most of the non-seasonal food at your local supermarket was shipped from Mexico, Belize, Brazil, consuming massive levels of fossil fuels along the way.  By buying their produce from local famers, Farm-to-Table restaurants cut their footprint considerably while supporting the local economy.  Chefs are also more likely to pay farmers in their community a fair price for their crop.

Since Farm-to-Table chefs must get to know local growers in order to form partnerships, they are infinitely more invested in their communities.  They know which farmer has the best kale, the juiciest tomatoes, the most succulent strawberries, and they’ve probably developed a personal relationship.  They’ve seen the earth their food is grown in, they know the character of the person who has grown it, and this deeper connection to the food results in a more balanced and joyful experience for the customer.

So now that you’re sold on the Farm-to-Table concept, tomorrow we’ll take a closer look at how it has affected the Maui culinary scene.