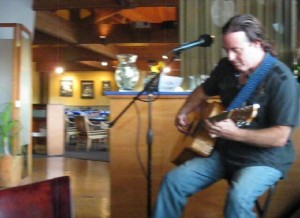 When I walked into Stella Blues in Kihei last Tuesday, I was quivering with enthusiasm. I had spent the whole day dancing in the kitchen, listening to music online from one of Tom Conway’s bands, Gypsy Pacific. (Including a stellar tune sung by Willie Nelson called “Peaceful Solution”).

I had heard tell of Tom’s guitar playing skills from dozens of people on the island. After two consecutive days of people urging me to seek him out, I finally found him at his weekly Tuesday afternoon gig at Stella Blues in Kihei.

My violin was on my back in the event that he might want to have me sit in.

Sure enough, after lounging back in my seat and bopping my head joyfully for a song or two, he asked me what i had in my case. What a friendly, down home guy! By that time I had become so enthralled in listening to Tom’s gritty, soulful voice, and driving, funky rhythms, that I just wanted to sit and listen. I urged him to keep going, and a few songs later, jumped on the mic to join him.

The bar was nearly full – not something you’d expect on a Tuesday at 4:00. Every last head was turned and glued on Tom as he laid down one tune after another of classic favorites with charisma and playful zest. The most strikingly fun part was when he would flick on his looping pedal, and start wailing a bone-chilling solo on top of himself.

The man has fingers that fly faster and with more precision than the shuttles on a loom.

More impressive, still, was his uncanny ability to morph between styles mid-song, and to play every last genre fathomable. From gypsy-jazz, to blues, to bluegrass, Tom has us in the palm of his hand, giggling with the joy of music.

After the show it was hard to pin Tom down. One enthused audience member after another approached him to shake his hand and buy his CD, but he just gave it to them as a gift instead!

At last, the crowd faded away, his dinner showed up, and we got to sit and chat about all that lay beneath the music.

A longtime Maui resident, Tom and his wife live upcountry in Haiku. Growing up in Detroit, he immersed himself in classic rock like Led Zepplin, the Stones and the Beatles. By high school, he had discovered jazz. After attending guitar school in Los Angeles, and studying with world famous guitarists like Jorge Strunz & Ted Greene, he made his way to Maui and never looked back.

With violinist Willie Wainright, upright bassist Marcus Johnson, and rhythm guitarist Phil Benoit, he started the only gypsy-jazz group in Hawaii, called Gypsy Pacific. They quickly gained notoriety, and were soon playing major stages all over Hawaii. As fate would have it, they caught the ear of Willie Nelson.

“I taught Willie’s son Lucas guitar lessons for a long time,” said Conway. “Willie’s favorite guitar player is (gypsy-jazz player) Django Reinhardt. Our band did an entire (unreleased) album with him. Willie flew us out to his ranch in Texas to record.”

It’s amazing the world class musicians and opportunities that lie hidden in the depths of Maui’s lush jungle.

“Maui is my favorite place to live,” he said. “I love to work the land. We have papaya trees and a big garden.”

Clearly a man dedicated to the earth, so, too, is he dedicated to his craft. The effortless ease and grace with which he plays all genres of music transports and elevates and entrances.

You can find samples of his music and touring schedule online at www.tomconwayguitar.com

Article enthusiastically brought to you by local musician, Maesyn (www.myspace.com/maesyn) 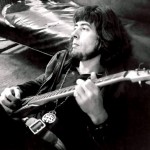 Hip-Hop icons The Grouch and Scarub sell out Casanova's