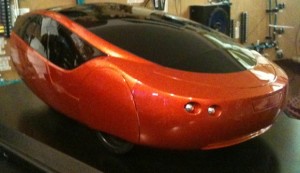 High-efficiency cars and their manufacturers have always pushed the limits, but a new car by Kor Ecologic may have taken eccentric automaking to a whole new level.  Kor Ecologic aims to make cars entirely with 3D printers, and last week showcased a prototype to the SEMA attendees in Las Vegas.

Known as the Urbee, the hybrid car has been made entirely by parts printed by large, 3-D printers.  Three-dimensional printers are a new technology very much like a classic computer printer.  However, when something is printed, say, a tire, it comes out in three dimensions as if the printer is actually a miniature factory.

So far, 3-D printers have been used largely to create small models and prototypes of new designs with foam or other low cost materials.  Kor Ecologic, however, wants to push the envelope by designing, building, and manufacturing whole fleets of Urbee cars with 3-D printers.  The entire process, if scaled, would allow Kor Ecologic to produce one of the most fuel efficient cars in existence in the most manufacturing efficient methods available.

The idea behind the Urbee is that a simple design allows for easy maintenance and repairs.  To install a new fender, Kor Ecologic can just print a new one with its massive 3-D printer.

Beyond the near impracticality of the idea, Kor Ecologic clearly put a lot of thought into the workings of the Urbee.  The new car, Kor claims, could be run on the exact amount of energy that can be harvested from the roof of one garage with the deployment of solar panels, making it a carbon neutral automobile.  However, if that proves to offer too little range, Kor Ecologic designed a high-efficiency ethanol engine to take over when the power runs out.

The Urbee is surprisingly efficient considering its manufacturing process and pushed 200 miles per gallon on the highway and 100 miles per gallon in the city during the 2010 X-Prize Competition.  For Kor Ecologic and it’s CTO, Jim Kor, this isn’t all about the Urbee, but instead the advancement in new manufacturing processes in the automotive industry.  However, if the Urbee proves to be as economical as it is efficient, Kor Ecologic should have quite the winning product on its hands.

Besides the prototype used in the 2010 X-Prize and presented at the SEMA show, a new viral YouTube video showcases the body design of what might soon be the most efficient car on American roads.