Tickets to the upcoming Elton John concert at The Maui Arts and Cultural Center on February 25th went on sale to MACC members only on Tuesday January 11th at 10am. Immediately phone lines to the MACC box office were busy and early afternoon attempts by Maui Now to purchase tickets online were unsuccessful. Around 1pm, a crowd was still standing in line at the MACC waiting to purchase tickets. Clearly, Maui is excited by the upcoming arrival of the “Rocket Man.” 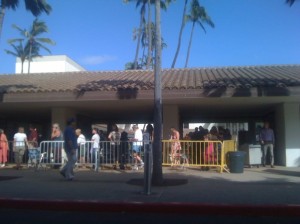 MACC Members Line Up for Tickets

On Wednesday, the ticket madness seemed to have slowed down just a bit and purchasing a ticket online was a breeze. However, it seems this is just the calm before the storm. By Wednesday is was hard not to notice the many proud comments of many Facebook users expressing their ticket purchase joy. A Maui Now prediction: this concert is sure to sell out.

Tickets to the general public go on sale this Saturday, January 15th.  Given the second rush that is sure to take place, Maui Now asked Facebook readers for their advice on the best way to score Elton John tickets. Here is what they had to say:

“Here’s the secret… stand outside the show with your finger in the air (pointing up) that’s the secret code for “I need a miracle”. Next thing you know some stranger hands you a free ticket. Works every time. P.S. don’t forget to smile”—Craig Eckert

“…and I think it’s gonna be a long long time…..”—Carlos Garcia

“Cure yourself from the Elton itch. Listen to William Hung’s version of rocket man!!”—Casper Schaadt

The Social Scene covers island buzz⎯from people and parties to the chitter chatter of what people are talking about on Facebook and Twitter. Send your Social Scene tips to k[email protected] 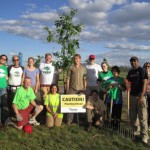 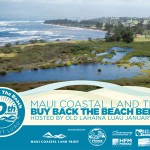