The search for two missing people on Kauai has shifted from rescue to recovery today, according to Kauai County officials. Personnel from the Kaua’i Fire Department returned for a sea-based search this morning for the two people who went missing when their ultra light aircraft crashed in waters off the island’s south shore on Tuesday. 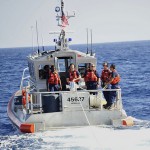 The aircraft was owned by Big Sky Kaua’i. The company’s owner and pilot, 55-year old Jim Gaither of Hanapēpē, and a 49-year-old female tourist who was a passenger are missing.

A kayaker in the vicinity of Point Allen made the initial report at around 11 a.m., telling emergency dispatchers that he saw an aircraft crash into the water. The pilot and passenger were reported to be wearing personal floatation devices and carrying a transponder.

Yesterday’s search was concentrated approximately 200 yards off shore in the vicinity of Kaua’i Coffee Company in Kalāheo, where debris believed to be from the aircraft was found.

“This is such a tragic event and our hearts and prayers go out to the families as we work with the Coast Guard to continue to search for the victims,” stated Mayor Bernard P. Carvalho, Jr. “Hopefully we can bring closure very soon.