A one-day $6 million sale of residences at Manele Resort may be demonstrating an awakening of the once still high-end, second home market in Hawaii.

On January 16, Accelerated Marketing Partners brought buyers off the sidelines at a sealed-bid auction which generated nearly $6 million in sales for five condominium residences at Castle & Cooke Hawaii’s Manele Resort. The highest price paid for a single property was $1.55 million.

In a written statement today, Sue Murray, VP of sales and marketing for Island of Lana’i Properties, Manele Resort’s principal broker, said, “Despite current challenges of the resort market in Hawaii and a consumer hesitancy to buy right now, the auction was a wonderful success.”

She continued to say that, “Throughout the accelerated marketing program, we received over 7,500 unique visitors to our auction website and the selling prices we achieved were about 80% of the most recent sale we had in the Palms at Manele development last year. While buyers were able to get a great deal for premier, island real estate, Castle & Cooke was also able to recoup a significant part of their capital.”

Bruce Barrett, executive vice president for Castle & Cooke also commented in the statement saying that the auction results spoke for themselves, and that “there hasn’t been much liquidity over the past two years, which has made second-home purchases extremely difficult, even for financially fit individuals. This sale freed up some financing, allowing things to start moving again.” 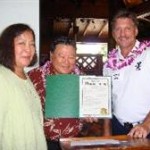