The Baldwin baseball team is every bit as dominant as most fans suspected and MIL rivals feared. The Bears improved their league record to 6-0 following a three-game sweep against Maui High to take control of the league’s Division-I race.

The Bears opened with a 6-5, eight-inning win over the Sabers on Thursday, and followed that up with victories of 10-2 on Saturday and 8-5 on Saturday at Iron Maehara Stadium.

The losses dropped Maui High to 4-5, while allowing Kamehameha-Maui to move into second place with a 4-2 mark. This week, Baldwin tangles with Kekaulike (2-4) while Maui High plays a key series versus the Warriors.

The Bears are coming off a runnerup finish to Punahou in last season’s state baseball tournament.

Victorino bounces back from calf injury 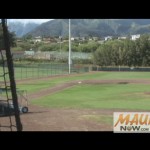