﻿ A fight against mosquito bites is being waged by the District Health Office on Maui following at least two unconfirmed cases of dengue fever on the island. Officials say results of initial tests should be available by the end of the week.

In addition to the two suspected cases of dengue on Maui reported by the Department of Health last week, Dr. Lorrin Pang, Maui District Health Officer, said there are a couple more suspected cases along the Hana Coast. 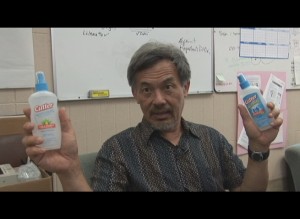 Dr. Lorrin Pang with the State's Maui District Health Office holds mosquito repellent. The bottles were purchased by the Maui Visitors Bureau and are being distributed in key locations along the Hana Highway. Photo by Wendy Osher.

“Worldwide, the number of cases reported doubles every five years,” said Dr. Pang. That means the incidence of dengue infection worldwide is four-fold since the Maui outbreak that peaked a decade ago in September of 2001.

The approach this time around has been proactive with three informational meetings hosted in the last four days in the East Maui communities of Ke’anae, Nahiku and Hana. A fourth meeting is planned at the Haiku Community Center at 6 p.m. on Monday, April 18, 2011.

“Their questions are more important than what we have to say, really,” said Dr. Pang. During the meetings, people with suspected symptoms are advised to report to a doctor and provide information to the Health Department. They are also informed about mitigating measures to clear standing water where mosquitoes can breed, and educated about the illness, its symptoms and threat.

Councilmember Mike White, who is assisting in coordinating the Haiku meeting said intervening early is a good idea. “Simple measures–removing debris that mosquitoes can breed in and dumping containers of stagnant water–can have a big impact on reducing our risk for dengue fever, so it’s important that the public has access to this information now,” said White.

Since March 24, 2011, the State Department of Health has confirmed four cases of locally-transmitted dengue in Pearl City on O’ahu. The DOH has received a total of 82 reports of suspected dengue fever cases statewide since monitoring was increased three weeks ago. Of those, the DOH has ruled out 34 cases, and 48 are pending lab results and/or investigation.

The State Health Office on Maui is also taking steps to distribute mosquito repellent purchased by the Maui Visitors Bureau. “We will start putting it where visitors go. It’s not that we’re trying to protect the visitors and not the residents,” said Dr. Pang. Rather he said, “We’re trying to prevent it from coming to our mosquitoes from the visitors.”

Dr. Pang explained that with the high incidence worldwide, a visitor could get bitten somewhere else, not experience symptoms until seven days later, and then be infectious for five days while on vacation.

The Department hopes to set up mosquito repellent distribution points at Twin Falls, at the Ke’anae roadside banana bread stand, the Ke’anae Arboretum, Kahanu Gardens, Wai’anapanapa, Upper Nahiku, and at the Pools of ‘Ohe’o.

Dr. Pang explained that one of the biggest fears is establishment of dengue in a community like Ha’iku where there is a combination of lots of people and lots of mosquitos. “If it ever got a hold in Ha’iku, oh my goodness, you’ve got a major battle on your hands,” he said.

Groups that could be called on to assist should the situation warrant are: the Maui Invasive Species Committee (M.I.S.C.), the Community Work Day Program, an Environmental Response Crew and/or the Medical Reserve Corps. 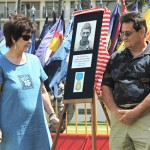 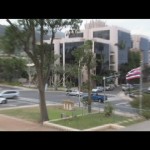